DeLaval ramps up milking robot production due to ‘surge in demand’ 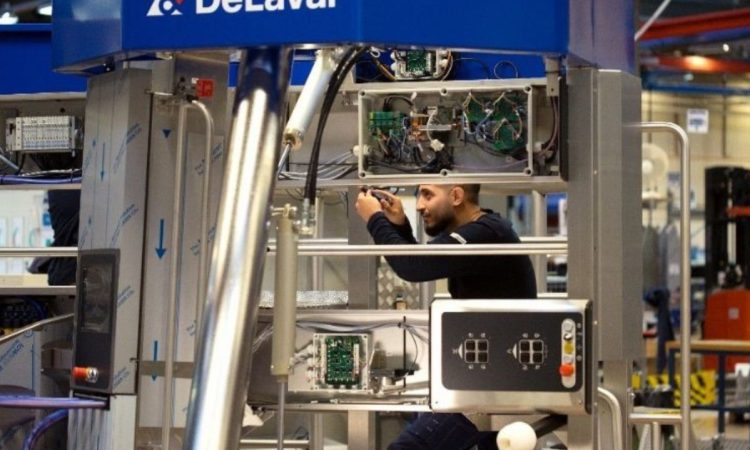 Sales of milking robots are up 20% with DeLaval having to increase production to match, the dairy machinery firm has announced.

A “surge in demand” has been seen in particular for VMS V300 and the newer VMS V310, DeLaval has claimed.

The Swedish headquartered company has made some bold claims regarding its new VMS V310 – stating that it attaches teat cups 50% faster than the previous model and milking capacity is up by 10%to a potential 3,500kg of milk a day, with lower running costs claimed.

Commenting, AMS cluster solution manager Edouard Alix said: “We see these efficiencies as the main driver for farmers choosing to switch to robots, or update existing ones, and we anticipate demand to remain strong as a result.”

“Strict safety measures” were implemented to protect staff during the Covid-19 pandemic and to ensure production could continue to meet demand, the dairy firm assures.

“We have been able to make adjustments to the production line to both protect our staff and increase the number of robots being produced.

This has led to an increase of more than 20% with lead time remaining consistent throughout.”

“This technology gives the farmer more data faster which means no more waiting for vets or physical signs of heat.

“Instead, the robot detects that the cow is in heat based on a milk sample which is taken automatically when she is milked,” the manager concluded.

Established in 1883, the Swedish milking machine manufacturer began trading in Ireland from 1931.