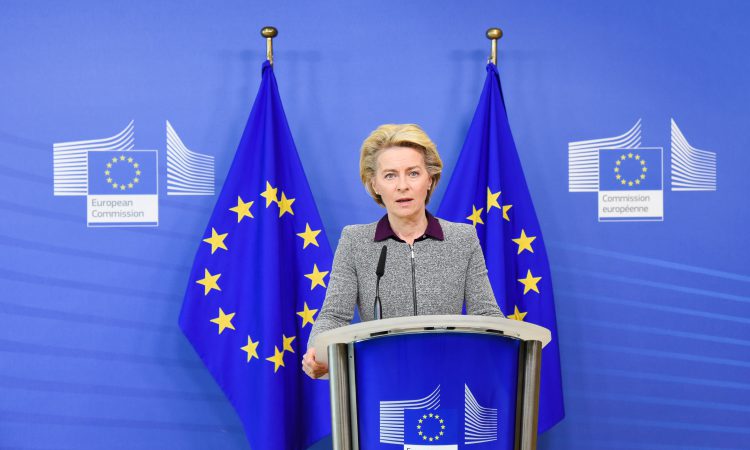 Von der Leyen launched a stinging attack on the British government today (Wednesday, September 16) in her first State of the Union address.

EU won’t back down on withdrawal agreement

The president told the European Parliament that talks on the transition deal between the EU and UK have not progressed.

She added that the EU will not row back on the withdrawal agreement to endanger peace on the island of Ireland.

She said: “That agreement took three years to negotiate and we worked relentlessly on it. Line by line, word by word.

The EU and the UK jointly agreed it was the best and only way for ensuring peace on the island of Ireland. And we will never backtrack on that.

“It cannot be unilaterally changed, disregarded or dis-applied. This a matter of law, trust and good faith.”

She also said there was “very little time” left for the EU to negotiate a trade deal with the UK.

The comments follow debate in the UK parliament this week on draft legislation which would breach provisions of the Northern Ireland Protocol which forms part of the withdrawal agreement.

The EU has given the UK until the end of September to withdraw the controversial draft bill which it says undermines the provisions of the Northern Ireland Protocol which British Prime Minister Boris Johnson had previously signed off on.

President von der Leyen concluded her comments on the withdrawal agreement during today’s speech by reminding the UK of the words of former British Prime Minister, Margaret Thatcher:

“Britain does not break treaties. It would be bad for Britain, bad for relations with the rest of the world, and bad for any future treaty on trade.”

Minister for Foreign Affairs Simon Coveney had previously described the suggestion by the UK that the EU would blockade British food to Northern Ireland as “spin” and “not the truth”.

He said that kind of language coming from Downing Street No.10 is “inflammatory”.