Cranswick CEO Adam Couch believes that every effort must be made to secure access to the Chinese market for pork produced in Northern Ireland.

“I am pretty sure that the industry is pretty close to getting this issue over the line. DEFRA has a further role to play in this regard, as do the relevant stakeholder groups in Northern Ireland.”

Cranswick already has access to China with its English plants, courtesy of the existing trade deal that exists between Brussels and Bejing.

But Couch admits that Brexit might change this set of circumstances.

“Approximately 6% of our overall turnover is accounted for by exports, with the vast bulk of this output destined for China.

And it is crucially important for this market to remain open to us, post-Brexit.

Cranswick bought the former Dunbia pork business at Cullybackey in Co. Antrim last November. The plant slaughters and processes 8,000 pigs per week. Cranswick is one of the largest food producers in Britain.

The business specialises in the processing of high-quality, pork, bacon and ham products. It has an annual turnover in the region of £1.3 billion (€1.5 billion) operating from 16 sites in England plus the Cullybackey plant in Northern Ireland.

“We have just completed a £2 million investment programme at Cullybackey,” said Couch.

“This will allow us increase our weekly throughput to 10,000 animals per week. And further automation should make a throughput of 14,000 head a feasible target.”

Couch said that Cranswick is committed to doing more business with its existing producer supply base in Northern Ireland.

He sees the prospect for farmer prices remaining fundamentally stable for the foreseeable future.

“EU pig numbers have fallen in the wake of the uncompetitive prices that had previously been available. However, the slide in the value of sterling has made imports into the UK less competitive while also boosting exports.

“We see ourselves as a force for good, where Northern Ireland’s pig farmers are concerned.

“Any development that creates greater competition for pigs must be a good news story for farmers.” 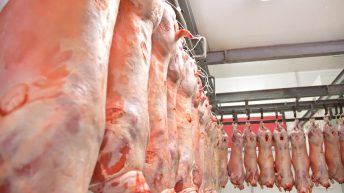