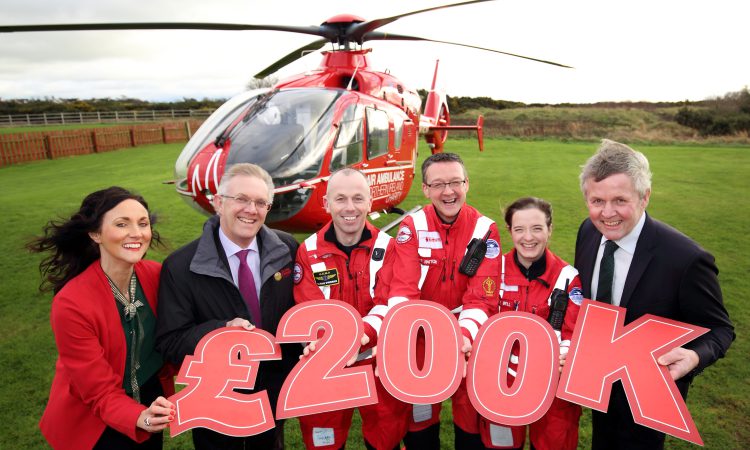 UFU president, Ivor Ferguson, said he has been “blown away” by the generosity of members, the rural community and industry partners.

We set what we thought was an ambitious target to raise £100,000 for this life-saving charity. True to form, the agriculture industry did not let us down – not only did we hit our target, we doubled it.

On top of their day-to-day work, UFU staff in Belfast and around Northern Ireland spent much of 2018 fundraising.

The money was raised through a myriad of ventures and events including calendars and books through to hiking five peaks across all six Northern Ireland counties in one day as well as a series of ‘can’t-cook-won’t-cook’ evenings.

“People really pulled out all the stops and their activities raised an incredible £186,000. The UFU has pledged £14,000 from its reserves, bringing the official centenary year total to £200,000,” Ferguson said.

It’s a service we all hope we, nor anyone in our family, will never need but we will be forever grateful it is there if we do.

“As UFU president in the centenary year no words can describe how proud I am of the massive effort people put in to prove that what looked an ambitious target was, in fact, modest,” he said.

UFU past president, Barclay Bell, who chose the AANI charity for the organisation’s centenary year, said it was impossible to thank individually everyone who got behind the campaign.

“We are delighted with what has been achieved,” he said. “Our fundraising efforts will fund 36 days of service.

“The air ambulance service brings critical care to anywhere in Northern Ireland fast. It’s already making a difference in rural communities and has been called out to a number of farm incidents. It’s a service that makes people in rural areas feel less isolated.”

Helicopter emergency medical service operational lead Glenn O’Rorke added: “We have found that unfortunately, agricultural incidents occur frequently and can be life-threatening – everything from cattle injuries, entrapments and crushing from farming equipment, machinery and vehicles.

“The speed of arrival of the doctor or paramedic team enables critical care to start at a much earlier stage than would be possible without this service. That can mean the difference between life and death.”