Home » Machinery » Farmhand: ‘Why not go straight into stubble with these new discs?’

Farmhand: ‘Why not go straight into stubble with these new discs?’ 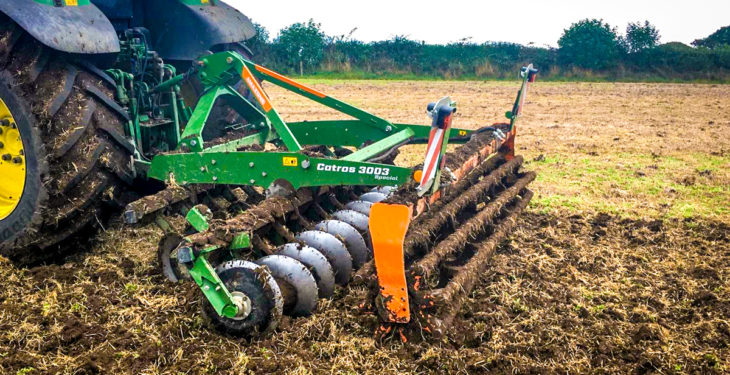 Like the existing Catros 3001, the new 3003 is designed for “shallow and intensively-mixing soil tillage”. It is fitted with the same 460mm plain discs. Farmhand says that these work best at a depth of 2-5in.

Claimed to be easier to set than the previous model, Farmhand says that, during field trials, the 3003 “delivered improved results across a variety of uses – from stubble cultivation to grass-reseeding work”.

Farmhand says that machines such as this are proving increasingly popular, with “high forward speeds” facilitating bigger work-rates. Other features of the 3003 include “lifetime maintenance-free bearings”, rubber overload protection and road lights.

According to Farmhand Sales Support Manager, Val McAuley, the 3003 is eligible for the latest EU TAMS II support scheme.

He added: “Backed by an Amazone finance package, the 3003, with an open crumbler roller, is available at an initial ‘hitch up and go’ VAT-inclusive payment of €1,400, followed by an additional nine half-yearly payments of the same amount.”

In other Amazone news, the company recently opened a new €20 million paint facility at its factory in Hude-Altmoorhausen.

The KTL paint centre, which is housed in an 8,000m² facility, has been designed with a capacity to paint up to 750,000m² of surface area per annum. KTL is the abbreviation for ‘cathodic dip’ painting (Kathodische Tauchlackierung). This, says Amazone, ensures “high-class corrosion protection – similar to that widely used in the automotive industry”.

The plant is digitally controlled and is divided into several operational areas. These include hanging up and taking off stations, a pre-treatment and primer coating hall, three curing ovens and a dip-paint and powder-coating area.

All areas are connected via a 2.3km-long overhead track system. Via this system, all the parts to be painted are automatically transported – via 140 carriages – from station to station.