A Holstein calf in the US believes that he is a dog and can even be found sitting comfortably on his owner’s couch.

Goliath, as he’s been called by his owners, was very thin and sick as a calf however, he’s now fully healthy.

Shaylee Hubbs, the calf’s owner, came across the calf on a nearby dairy farm where he was a ‘drop calf’ and would be going to slaughter.

Hubbs took him home and Goliath was nursed back to health with the help of the family vet.

Speaking to countryliving.com Hubbs said that she noticed that her Great Dane, Leonidas, starting mothering Goliath, even though Leonidas is a male.

“He would lick the little cow on the face and try to nudge him to stand up,” Hubbs told countryliving.com.

“He would lay down with the sick little cow for hours just to keep him company. Leo, of course, was so bewildered at what the cow was trying to do and thought it was a fun game to play.

“The Great Dane and Holstein bull became the best of friends,” she told the website.

Hubbs tweeted a photo of the calf lounging on the couch:

My cow thinks he's a dog… We left the door open for 5 minutes pic.twitter.com/Wj1OHygrAH

Hubbs told the website that the family allowed Goliath to sleep in a playhouse in the backyard, which also served as his place to run around during the day.

However, she said that Goliath would often fog up the windows by staring inside the house at the lucky dogs lounging around on the couches.

The inspiration for the tweet came from finding Goliath on the couch after Hubbs couldn’t find him outside.

We panicked and looked all around the house and checked for any open gates.

“Everything seemed in order. Then we walked into the house and look who we found lounging ever so comfortably on our couch – Goliath!” she told the website.

Goliath has since got his own Twitter page, where he tweets regularly his exploits.

Goliath likes to run around outside with Leonidas, the family’s alpacas and pigs:

Check out my pasture!! pic.twitter.com/AIBaELsQyg 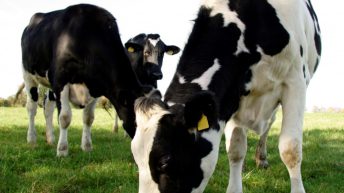 A US dairy farm has turned dung into electricity for 1,000 homes 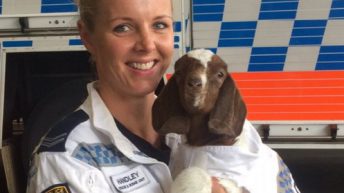