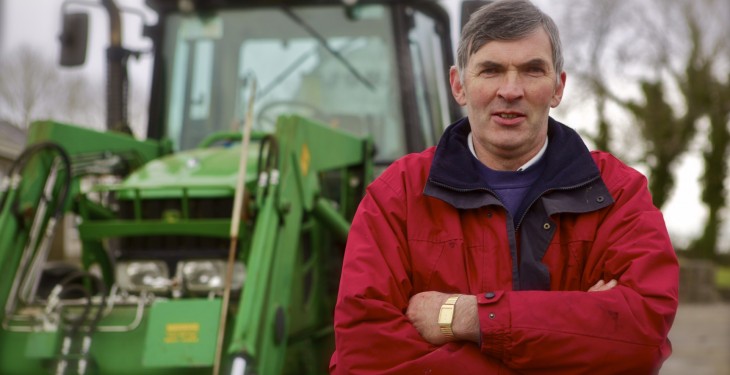 Seamus Killoran who is featured on the FBD farm safety video.

Farm deaths increased by 87% in 2014, with 30 people killed compared to 16 in 2013. For the fifth year running, the agriculture sector has recorded the highest number of fatalities, representing roughly 55% of all work related deaths in last year.

“The agricultural industry is entering an exciting new expansion phase which will provide an important contribution to Ireland’s economy. However the sector also faces significant challenges in achieving the necessary improvements in farm safety standards,” Jim Bergin, CEO GII said.

Farm deaths differ from other workplace accidents as on the farm fatalities generally involve family members including children and elderly persons and cause much suffering to farm families and their communities.

“As an industry we have to do more to improve the safety on our farms. Achieving a lasting behavioural change is a key part in establishing a sustained reduction in the rate of fatalities and injuries in the sector. Farm safety has to be promoted as a core value for all our businesses.”

Audrey O’Shea, GII’s Sustainability Manager who has been working closely with FBD to deliver this campaign said GII’s association with FBD’s ‘Champions for Change’ campaign builds on our comprehensive ‘Zero Harm on Farm’ initiative which promotes health and safety as one of the main pillars of the organisations sustainability programme.

“As part of this vital farm safety awareness campaign, GII and FBD are providing all Glanbia milk suppliers with farm safety information packs targeting the practical steps that farmers can take to improve health and safety for themselves, their workers and family members.”

The packs include practical and informative Safety booklets as well as:
• HSA Survivor Stories DVD;
• Safe Quad Skills and Operation DVD; and,
• And a Champions for Change wristband.

As part of the Glanbia collaboration with FBD on the Champions for Change campaign, Glanbia Agribusiness have erected ‘FBD’s Champions for Change’ signs at all of the Agribranches and over the coming months Glanbia will accommodate practical first aid training at the branches amongst other helpful initiatives.