Global wheat production is expected to fall in 2017, according to the Food and Agriculture Organisation (FAO) of the United Nations.

The FAO forecasts that global wheat production will amount to 744.5 million tonnes, which would equate to a 1.8% drop from the record high levels seen in 2016.

But this estimate is set to remain above the last five-year average, the FAO said.

The decline would mostly reflect the projected decrease in plantings in North America, and a return to normal production levels in Australia following an exceptionally high output this season, it added.

In the year ahead, the organisation believes the total use of wheat for direct human consumption is expected to rise by 1.1%, while the feed utilisation of wheat is forecast to increase by as much as 6%.

Worldwide wheat inventories in 2017 are anticipated to rise by 6.6%, or 15 million tonnes, to nearly 240 million tonnes, according to the FAO, led by stock build-ups in Australia, China, Russia and the US.

In total, the FAO estimates that world cereal production in 2016 will amount to 2.6 billion tonnes. This represents an increase of 0.3% on the expectation outlined last month.

The FAO Food Price Index averaged 175.5 points in February, its highest value in almost two years, marking a 0.5% increase from its revised January value and 17.2% above its February 2016 level.

Increasing wheat prices led to a 2.5% increase in the organisation’s Cereal Price Index. 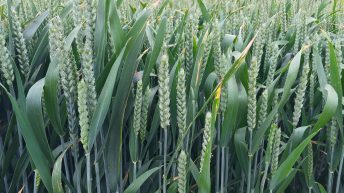 ‘Autumn-sown cereals in good condition, prior to first fertiliser application’