The EU Commissioner for Agriculture, Phil Hogan, is on an official visit to Hong Kong, Vietnam and Indonesia with EU agri-food producers this week.

In 2016, over €100m from the EU budget is available to promote EU agri-food products in third countries and promote consumption outside and inside the EU.

Speaking ahead of his journey, the Commissioner said that he’s continuing his ‘diplomatic offensive’ of 2016, by visiting Vietnam.

“With a population of 90 million, Vietnam is a fast-growing and dynamic economy, with huge potential to continue growing in the coming years.

“During our mission, I will be accompanied by 42 representatives of EU agri-food businesses active in sectors with large potential in Vietnam and Indonesia.

“The total turnover of the European companies that are represented in this mission is in excess of €170 billion.”

Importantly, there are producer groups and cooperatives heavily represented, so that the European farmer can have a direct route to global markets.

“They will be meeting buyers and potential business partners in order to highlight the quality of our products and introduce to importers and authorities the stories and values behind our agricultural production,” he said.

The Commissioner said that this is a follow on from previous visits to Mexico, Colombia, China and Japan in 2016, where the EU has already witnessed major growth in exports of European food and drink.

The Commissioner’s programme foresees a series of political meetings with, among others, Nguyen Xuan Phuc, Prime Minister of Vietnam, and the Vietnamese Ministers of Agriculture and Health; the Head of the Indonesian National Agency for Drugs and Food Control, and the Secretary for Food and Health of Hong-Kong.

The visit’s core objective being to promote EU agri-food products, while Commissioner Hogan will also meet business stakeholders and chambers of commerce and will open events on Geographical Indications in Jakarta and on the EU-Vietnam Free Trade Agreement in Hanoi.

In addition to the Commissioner’s programme, the representatives in the business delegation will hold several meetings on site and will participate in different events. 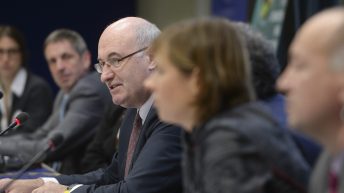 Agricultural Markets Task Force to report to Commission in November