‘If Stormont collapses, so will NI’s Climate Bill’, protesters warn 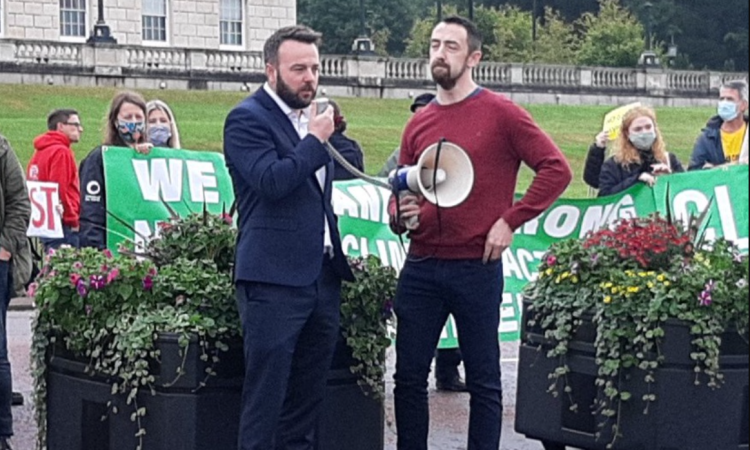 Protesters at Stormont have warned if Northern Ireland’s political institutions fail, so will a controversial bill setting a net-zero target for Northern Ireland by 2045.

The Climate Change Bill was tabled as a private member’s bill by Green Party MLA Clare Bailey. The bill is one of two bills addressing climate change currently passing through Stormont.

What is in the Climate Change Bill?

If passed, the Climate Change Bill would legislate a net-zero target for Greenhouse Gas emissions for Northern Ireland by 2050.

Critics of the target include the UK’s Climate Change Committee, which warned it would puts “unreasonable demands” on the region’s farming industry and risk off-shoring food production to parts of the world where farming is less sustainable.

The bill completed its second stage on May 10 and is currently at the committee stage.

The gathering, taking place on the first day back after Stormont’s summer recess, was organised by the Climate Coalition of Northern Ireland, an umbrella organisation made up of 25 non-profit groups.

‘No time to tinker around the edges’

Speaking at the event, SDLP leader Colum Eastwood (pictured top) said there was no time to tinker around the edges of the legislation.

“Whatever goes on behind us in this building is very important – it fills radio shows, it fills the TV news at night- but it is nowhere near as important as the reason we have gathered here today,” he said.

“This is the fight of our lives. We have to do what previous generations refused to do. We have to save this planet.

I believe firmly if you look at the reports, it is absolutely clear we have to act now and act radically. There is no time for tinkering around the edges.

“If this Assembly goes down, this bill goes down as well,” Eastwood warned.

“If this Assembly goes down, there will be absolutely no representation from Northern Ireland at COP26 [the 2021 United Nations Climate Change Conference].”

Eastwood said he was also putting forward his own bill at Westminster – the Climate Emergency and Green Jobs Bill, which he said would be “radical” in bringing forward net-zero targets and includes proposals for a levy on businesses based on their emissions.

Sinn Féin MLA Daithi McKay, who is also the vice-chairperson of the Climate Coalition of Northern Ireland (CCNI), called on Assembly legislators to deliver “robust” net-zero climate legislation for Northern Ireland as a matter of urgency.

McKay said: “We have been denied any climate legislation whilst we watch on as other governments have started to show leadership and taken steps to tackle the climate emergency. This has left us impotent in the face of an unprecedented climate emergency.

The time for dithering, delaying, and climate denial is over. We need a robust net-zero Climate Act as a matter of extreme urgency.

“It goes without saying that we need an Assembly up and running for this to happen.”