Lemken tillage kit outing all set for the north-east 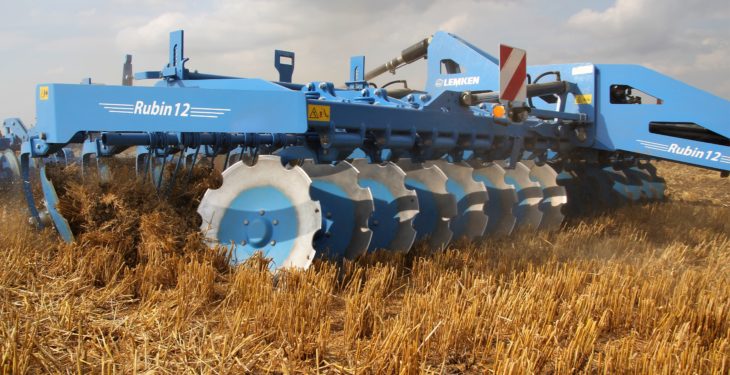 Lemken, in conjunction with dealership Leinster Farm Machinery, will hold a demo day on Thursday, October 12.

It will kick off at 10:00am and run all day (beside the dealership’s premises in Duleek).

According to Lemken’s Irish area sales manager – Derek Delahunty – machines and implements from the German manufacturer’s line-up will be working at the event.

Included in the mix will be the ISOBUS-ready Juwel 8 TCP plough, which made an appearance at a previous Lemken working demonstration in Co. Cork.

Also on hand at the event will be Lemken’s “full range of disc harrows” – most notably the Rubin 12. According to Lemken, this compact disc harrow “can operate at the same 20cm working depth as a cultivator”.

It’s claimed to be suitable both for stubble cultivation and for primary soil tillage – even in very heavy soil conditions.

It has two rows of serrated concave discs, with a diameter of 736mm, to produce “intensive mixing and crumbling”. The symmetrical arrangement of the discs (in each row) is said to enable working without lateral pull, even at high driving speeds.

The 20° angle of the discs to the soil and the 16° angle to the direction of travel “ensure optimum penetration and enable cultivation across the full width – from a working depth of just 7cm”.

The legs are specially curved to “provide maximum clearance between the discs”. This, claims the manufacturer, prevents blockages – along with the slight offset of the middle discs.

An impact harrow is located behind the first row of discs, while a levelling harrow behind the second row distributes and levels the soil.

The mounted version of the Rubin 12 can be equipped with a ‘Uni’ wheel, which transfers weight back onto the tractor’s front axle when the implement is raised.

Delahunty describes the Rubin 12 as a “must-see machine“.