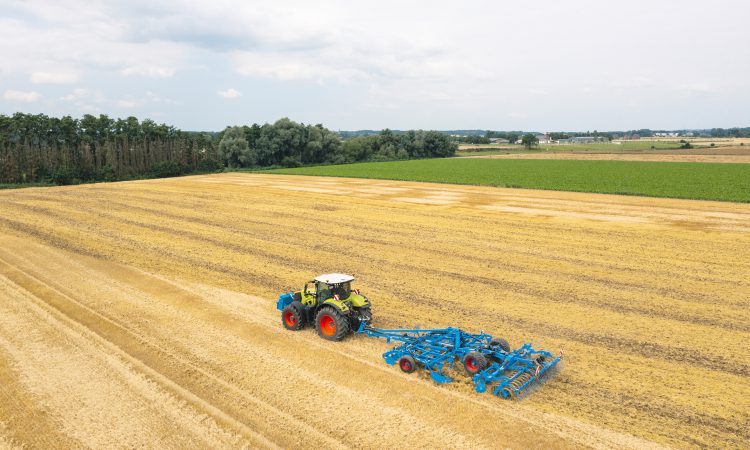 The new Karat 10 three-beam cultivator from Lemken, which Agriland got to see first-hand during a demonstration in Germany, features a range of improved design features, which will be of specific interest to farmers.

The tines are now arranged symmetrically around the tensile axis, making the machine extremely low-draught and ensuring intensive mixing at the same time.

The design also ensures lower traction requirements and less side draft compared to previous models, according to the company.

This is particularly important when using the cultivator with track guidance systems.

All of this is building on the efficiency of the Karat cultivator, which has been successful for many years.

The implement is now available with more equipment variants and drawbar options than before, opening up even more versatile applications in professional crop production and allowing it to be used with tractors with maximal tyre width.

The wing shares for shallow cultivation have been widened. Alternatively, narrow shares can be used for deep cultivation.

New, specially shaped guide plates improve the mixing effect. The Karat 10 can also be equipped with DeltaCut shares for shallow cultivation, which are optionally available in carbide.

The machine comes with a quick-change system as standard, to allow operators to set working depths between 5cm and 30 cm quickly and easily.

The edge levelling tools, which allow the implement to be used while folded, are a further new addition. The cultivator is optionally available with a leading disc section upon request.

This ensures that large volumes of organic matter can be incorporated even better into the soil.

The discs, which are individually suspended on leaf springs, chop organic matter and break up coarse soil clumps so that the machine can mix soil intensively and work without clogging.

Centrally adjustable levelling elements provided behind the tine section ensure even levelling, according to Lemken.

Specially shaped star wheels are also optionally available, which run ahead of the roller for optimal results, particularly when working with heavy soils.

The new Karat cultivator is available in both mounted and semi-mounted options, with working widths between three and seven metres.

A traction booster and the ContourTrack system for working in hilly terrain are specifically available for the semi-mounted models.

Customers can also choose from the full range of Lemken rollers, if required. A trailing harrow for removing soil from roots is also optionally available.

The first variants of the new Karat 10 will be available from summer 2022.