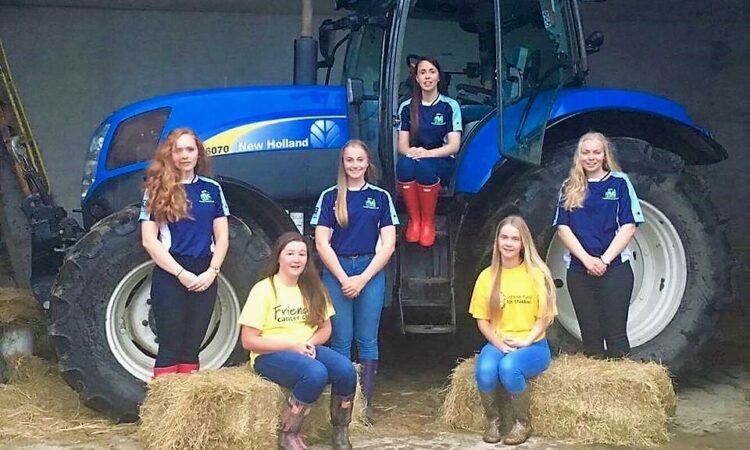 Around a dozen Co. Down Young Farmers’ girls have pledged to chop their hair for good causes.

Inspired by the story of a young Alopecia sufferer, they hope to donate around 90in to “The Little Princess Trust” – a charity which makes wigs for children.

Supporters are invited to watch on as the 11 young women from Spa Young Farmers’ Club (YFC) go under the hairdressers’ scissors at a club meeting on November 21.

Spa YFC member Nicola Edgar (24-years-old) explained that her personal experience of hearing how a young girl had lost her hair and watching a local documentary about hair loss had made her want to do something to help.

“The young girl was only around 13-years-old or 14-years-old and she had lost all her hair to Alopecia,” Nicola said.

“She started to tell me about how she got one wig for free from the NHS (National Health Service), but it was a basic one that always caused her to scratch at her head, constantly moving about and it was very hot underneath it making her scalp sweat.

“She was so grateful to have had something from the NHS, but she needed something more suited to her needs.

The girl was on a sports team and she was so frustrated that eventually she decided just to play without it.

Nicola – who has had long hair almost all her life – is hoping to cut around 15in from her hair, which currently reaches half way down her back.

She said: “The shortest I have ever cut it was to my shoulders years ago and I grew it back again, but other than that it’s never been any shorter. I know I will miss it, and my hairdresser knows I will probably try to change my mind, but I really want to be able to help someone else.”

Once other members of the club heard what she was doing, they also wanted to get on board.

Nicola added: “The idea came from knowing that it will help some little child and hopefully make them feel better in what seems an awful journey.

It means nothing to us just talking about cutting our hair, but to a little child somewhere it will mean the world.

“Once I started talking about what I wanted to do, so many other people have come forward with their stories – I’ve found out about girls and women who have been wearing wigs all their lives but never told anyone. We have had a lot of positive feedback about what we are doing and hope it will also raise awareness.”

As well as donating their hair, the girls will also try to raise money for two local charities; Friends of the Cancer Centre and Northern Ireland Cancer Fund for Children.

A fair featuring beauty, crafts and home baking stalls will be held on Saturday, November 18 at Ballynahinch High School.