Farmers in Northern Ireland have seen some recovery in the farm-gate milk price despite the volume of milk collected in October increasing, recent statistics show.

In October of this year, the average farm-gate milk price, including retrospective bonuses was 24.35p/L (29c/L).

This represented an increase of 3.6p/L (4.3c/L) compared to the prices received in October of last year, figures from the Department of Agriculture, Environment and Rural Affairs (DAERA) show.

The farm-gate milk price also rose between September and October, an increase of 3.23p/L (3.8c/L).

Meanwhile, the volume of milk produced in the North fell to 157.87m litres in October 2016, a drop of 5.5% compared to the same month last year.

Advertisement
This decrease equated to 9.18m litres less milk produced in Northern Ireland for the month of October year-on-year.

This leaves the total level of milk production for the year to date in Northern Ireland at almost 1.88m litres.

Milk Production In The Republic Of Ireland

The Republic of Ireland also witnessed a drop in milk production in the month of October, the latest figures from the Central Statistics Office (CSO) show.

Domestic milk intake by creameries and pasteurisers was estimated at 513.1m litres for October 2016, a drop of 4.3% compared to the corresponding 2015 figure.

At EU level, the latest figures from the EU Milk Market Observatory (MMO) show that EU milk collections decreased by 3% in September 2016 compared to September 2015.

This is the fourth month in a row that EU milk production has fallen after falls in June, July and August.

Milk collection figures were down 1.9% on August 2015, while July and June production was down 1.4% and 2.3%, respectively, on the corresponding months last year. 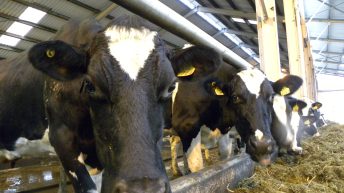