US company Tribine has announced that its articulated combine with a 27t chaser bin is to go into production.

Newton City Council in Kansas, US, has approved a 2ha production plant which will house the engineering and administrative offices of Tribine Harvester, as well as final assembly, testing, and shipping.

The articulated combine assembly is to start in January 2016, the company says and the design will be the first new combine architecture since the forties.

Ben Dillion, a US farmer, designed the combine, the front half of which is an Agco Gleaner S77 rotary combine with the grain tank removed and replaced with a 370hp engine.

Grain goes from the front threshing element to the rear tank via a 30cm diameter auger and chopped straw goes out in the space between both, Tribine says.

The Tribine has three hydraulic pumps power its all-wheel drive, all-wheel steering and unloading auger and the rear section can get somewhat closer to a trailer than is usual.

The 27t tank can be emptied in just over two minutes due to the Tribine having a 56cm diameter, 7m-long two-section discharge auger and being set at just less than 45deg right at the back of the machine.

The Tribine can empty at a rate of 13.5t/min and the whole machine weighs 45t.

Tyres on the monster combine are 1.2m wide, 1.8m tall and are said to give less compaction than a standard combine. 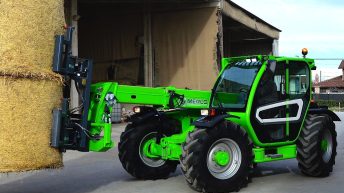 New Merlo range to be unveiled at Ploughing Championships