Nestlé remains the world’s largest dairy company, with a turnover of €20.9 billion in 2014, according to Rabobank.

The Global Dairy Top 20, Rabobank’s latest annual survey of the world’s largest dairy companies, highlights the giants of one of the most valuable food sectors on the globe.

Nestlé retained its first place spot on the table with Lactalis edging into second place for the first time, Rabobank says.

Dairy Farmers of America broke into the top five dairy companies in the world, moving up from sixth place last year.

“While the names of the world’s 20 largest dairy companies will be familiar to industry followers, the order saw something of a shake-up compared to 12 months prior,” Rabobank Global Dairy Strategist Tim Hunt says.

Currency shifts impacted company rankings, according to Rabobank but also highlighted the deterioration of economic growth and near-term growth prospects for dairy in many emerging markets, along with enhancing the buying power of US and Chinese companies.

Faced with slowing growth at home, Chinese companies may need to harness that improved spending power if they are to continue to rise up the ranks at the pace they have achieved over the last decade, it says.

Only one Chinese company made it into the top 10, Yili, with an annual turnover of €6.5 billion, however, there was some positive news for China as dairy company Mengniu jumped three places into eleventh place. 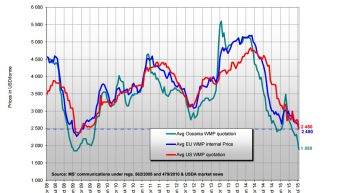