New at this year’s LAMMA show from Czech manufacturer Zetor was the Hortus HS 65 tractor. Together with the new Utilix models, this tractor was first unveiled at November’s Agritechnica fair (Germany).

This was Zetor’s 15th time to exhibit at LAMMA – now the UK’s biggest farm machinery show.

Deliveries of these new tractors are expected to kick off in March of this year.

The Hortus model range is made up of two model types – the CL and HS. In either guise, the tractors are equipped with a four-cylinder, 67hp engine.

This engine is coupled to a mechanical transmission with 24 forward and 24 reverse gears. The HS model is also equipped with a power-shuttle.

Maximum speed is 40kph; these tractors are also equipped with wet brakes.

Two oil pumps feed the hydraulic circuit; maximum flow is up to 60L/min. These tractors are also fitted with air-conditioning.

Meanwhile, Zetor’s new Utilix tractors are also home to four-cylinder engines. The HT 45 has 43hp, while the more powerful HT 55 churns out 49hp. These tractors are equipped with three-stage hydrostatic transmissions; maximum speed is 30kph.

85% of production is exported. Apart from the Czech Republic and Slovakia, the company’s traditional markets include Poland, Lithuania, Germany, the UK, France, the USA, Bulgaria and, of course, Ireland. 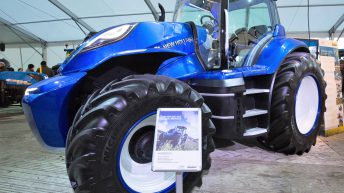