John Deere, in cooperation with Joskin, has unveiled the "world's first" continuously-variable transmission with an electro-mechanical power split, including an implement interface.

This "completely new concept" (for 8R Series tractors) has been awarded the only gold medal by the Agritechnica Innovation Commission jury (ahead of next month's Agritechnica show in Germany).

On the new so-called 'eAutoPowr' transmission, John Deere has replaced the hydraulic components with an electric power path.

Power-train durability is said to exceed that of any other similar concept previously offered by the industry. In addition, says John Deere, maintenance costs are significantly lower. 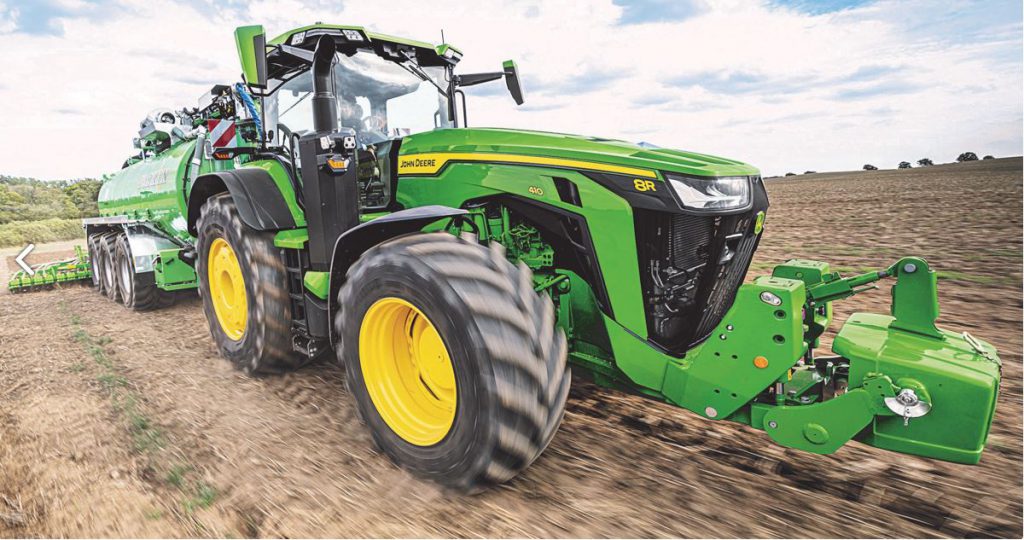 Another apparent advantage of eAutoPowr is its increased efficiency, especially in the partial load range. Additional operator benefits include "very precise speed regulation and better acceleration".

To drive suitable implements and trailers, eAutoPowr can provide up to 100kW of electrical power, with either 700V direct current (DC) or 480V variable-frequency, three-phase alternating current (AC).

This, claims John Deere, is the first transmission to offer a cost-effective electrification solution for tractor-implement combinations, by merging power generation and propulsion in one system.

To demonstrate this, John Deere and Joskin have jointly developed a special tractor and slurry tanker combination.

The 25.5m³ slurry tanker is equipped with two drive-axles powered by a 100kW electric motor, operated via a standard AEF ISO socket. The drive-axles provide a "significant increase in traction".