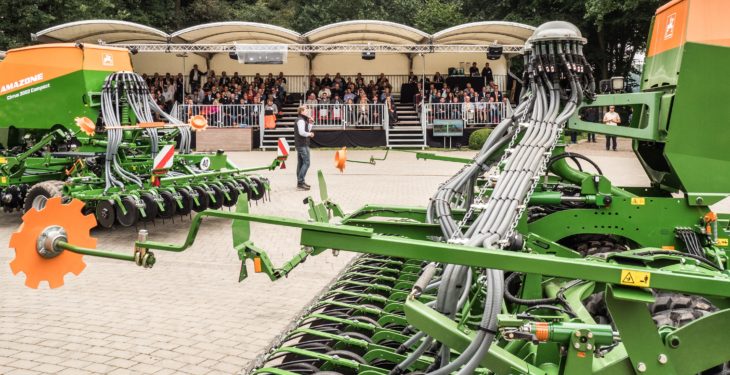 Amazone has rolled out a brace of novel machines – including a new, high-tech trailed fertiliser spreader – in advance of an official unveiling at this year’s Agritechnica show in Germany.

Commenting on the company’s performance at the launch, Christian Dreyer – one of Amazone’s two directors – said that he is expecting a “significant increase in turnover for 2017”.

“We are on a stable road to success and intend to continue on this way of sustainable and continuous growth,” Dreyer explained.

Dreyer noted that Amazone fertiliser spreaders celebrate their 100th anniversary this year. He explained: “This story of success, which started in 1917 with the development of the Michel worm-auger spreader, sets new standards for precision in the sector of fertilising technology.

There is now a weigh cell under each of the hopper’s four corners, along with a tilt sensor (to compensate for slopes).

It can also be equipped with a 28° steering axle, to follow tightly behind the tractor when turning. Buyers can also opt for electronically-adjustable, load-dependent brakes.

Available on trailed and mounted spreaders is a new ‘WindControl’ feature; its on-board anemometer monitors wind speed and adjusts the machine (disc speed or the flow of fertiliser) to compensate for gusts. In the event of wind speeds getting excessive, it will warn the operator.

To make tray testing (of its fertiliser spreaders) a more inviting task, Amazone has launched an app whereby granules of fertiliser can be detected on special mats – to speed up the job and remove the chances of making a mistake.

Just like when using trays, the mats are placed – properly spaced out – across the machine’s working width.

Also new is the CatrosXL compact disc harrow. And, following the take-over of the factory from Vogel & Noot, Amazone is offering more and more ploughs; the latest is the semi-mounted Hektor – available with up to eight furrows. 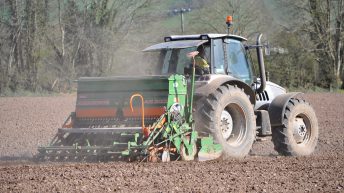 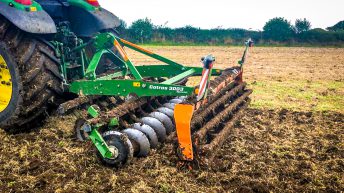 Farmhand: ‘Why not go straight into stubble with these new discs?’