NI agri-food to take a leaf from the aerospace industry 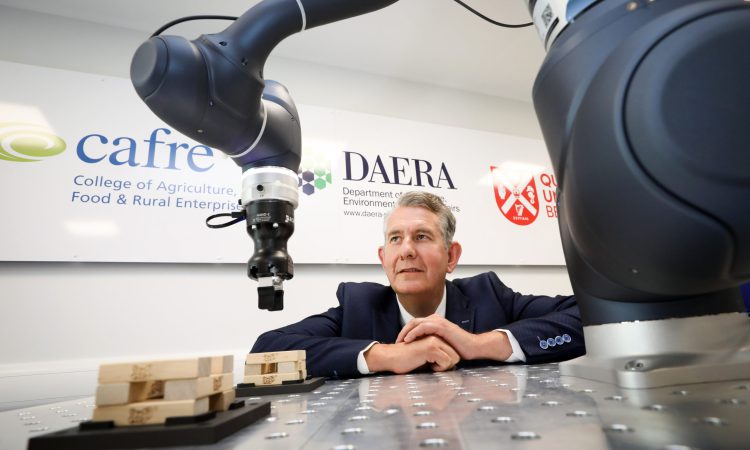 Northern Ireland’s agri-food industry is to take a leaf from the aerospace industry’s book, in harnessing robots within production lines.

It includes modern automated machines – dubbed ‘cobots’ (short for collaborative robots) – which are designed to work safely alongside humans or even in the most advanced examples, fully automated factories.

A research and development project has been launched between CAFRE and the Northern Ireland Technology Centre at Queen’s University Belfast (QUB) to investigate applications within the agri-food industry locally.

The project will also see robotics and automation embedded into the future CAFRE curriculum, ensuring local students are equipped for emerging opportunities in this area.

Learning from the aerospace industry

Speaking to Agriland, Minister Poots said: “Most of this technology is already in use in the aerospace industry. The question is how can we look at some of that work that has already been done and that innovation and apply it to the agri-food sector.

“For the long term security of the industry it is absolutely critical and it’s important that this move is made now.”

While the cost is likely to mean high technology will remain the preserve of larger firms, Minister Poots explained it could have applications for ‘repeat jobs’.

CAFRE food technologist Dessie Brady also explained some types of modern machines (such as robotic arms) could be programmed for multiple tasks, offering smaller firms a better return on their investment.

He also said the technology could replace some of the more tedious tasks, offering employees more fulfilling work.

The new robotics laboratory at CAFRE will even allow business managers to simulate how it would look to transform their own processing plant into an automated setup.

The team are able to simulate a full year’s worth of production to identify any potential trouble spots without the cost of – and the entrepreneur can even take a look at a life-sized version of how their factory will look using virtual reality (VR) technology.

“At Queen’s, we are focused on seizing opportunities where Northern Ireland has international strength and capability,” he said.

Working closely with industry, we hope that our cutting-edge research and expertise robotics, automation and manufacturing will help transform food manufacturing and packaging processes and allow local companies to deliver growth and scale-up.”

But there will still be some challenges to overcome.

Andrew Schofield, a senior manufacturing engineer at the Northern Ireland Technology Centre, explained: “It’s very challenging for the agri-food sector because of the typically organic nature of products – it makes them difficult for the machines to handle.

But he is confident the technology will eventually catch up.

“It’s already adapting to the agri-food sector, with things like soft grippers [for the robots] which are better designed to handle food products,” he said.

Minister Poots concluded: “The last 100 years has seen technology advance at an incredible rate. In this centenary year for Northern Ireland, I am encouraged to see the local sector preparing for the next 100 years.”