NI vets praised for ‘strong and supportive’ work ahead of Brexit 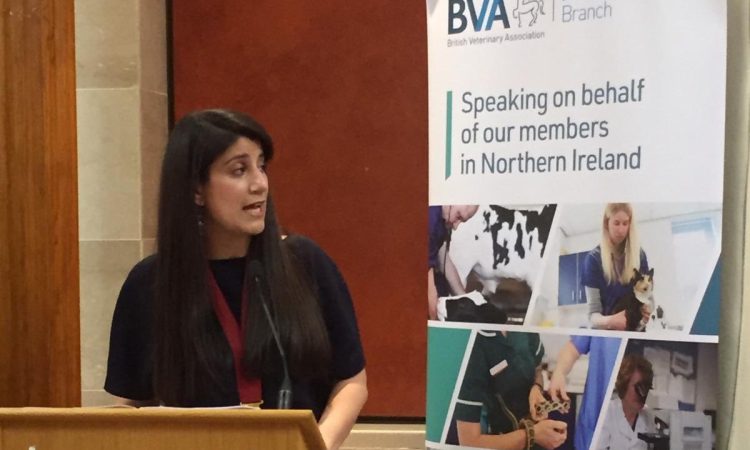 The British Veterinary Association’s Daniella Dos Santos has used her first major speech as president to praise the vital work of vets in Northern Ireland.

Speaking in Northern Ireland’s Parliament Buildings at the BVA’s annual dinner, Dos Santos praised the way the profession had prepared for the challenges and opportunities presented by Brexit.

Depending on the outcome of Brexit, Northern Ireland could soon become one of the most complex parts of the UK for animal produce trade and livestock movements.

Dos Santos explained that something as simple as taking a dog to Donegal for the weekend could take as many as four months of planning for pet owners due to new demands on small animal vets to fulfil requirements for vaccination and rabies testing.

She told guests how a no-deal Brexit would impact on Northern Ireland’s vets, as it would lead to a significant rise in demand for veterinary certification of animals and animal products for export over the land border and into the EU but said that her colleagues in the region had risen to the challenge.

Addressing over 80 guests at the dinner in Stormont, including MLAs, Northern Ireland’s chief veterinary officer Robert Huey, key representatives from animal health and welfare organisations and colleagues from across the veterinary profession, she said: “We know that a lot is being to prepare for, communicate and mitigate against the challenges that a no-deal scenario could present.

An example of this was the recent DAERA certification training days, which nearly 150 vets attended to get the qualifications needed to certify animal products in the event of a no-deal Brexit.

“The turn-out across two days included small animal vets, recently retired vets and vets on maternity leave, all wanting to do their bit to get the sector as primed and ready as possible for the precited increase in demand for certification services if we do leave without a deal.

“I see each and every vet who came along as a credit to the workforce and a sterling supporter of Northern Ireland’s agri-food industry.”

Dos Santos also used the event to call for support for BVA’s new manifesto for animals, vets, and public health, which sets out 10 pledges for political parties to sign up to ahead of the General Election, including a call to reject a no-deal Brexit.

She said: “Our pledges range from species-specific improvements, such as a ban on keeping primates as pets, to changes in how legislation is developed and enacted, such as a commitment to uphold animal welfare standards in future trade deals and agricultural policy.

“We want to see the principle of animal sentience finally pushed over the line and into law, and we want to see animal welfare on the national curriculum, to give future generations an early start in understanding what it means to care for animals and ensure they lead a happy, healthy life.

Where pledges span devolved policy, we will be engaging with DAERA in lieu of a minister to ensure that they are implemented in Northern Ireland.

Dos Santos also used her speech to praise the cross-sector work underway in Northern Ireland both to research and protect against diseases, and to tackle the growing threat of antimicrobial resistance (AMR) in animal and human health.