Home » N.Ireland » NIO advises farmers who bought sheep in Britain to resell them

NIO advises farmers who bought sheep in Britain to resell them 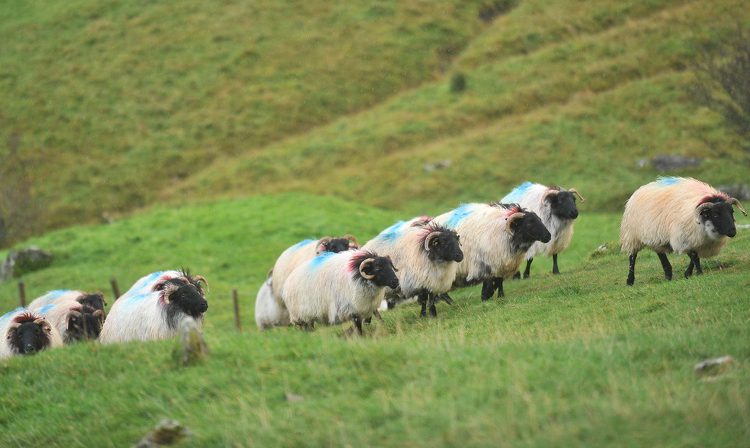 Government advice for Northern Ireland farmers to resell now-stranded sheep bought in other parts of the UK has been met with frustration from industry leaders.

The Ulster Farmers’ Union and National Sheep Association warn a high proportion of the sheep which were destined to enter Northern Ireland from Britain would not be able to meet new health standards brought in from January 1.

In a written response to the union, the Northern Ireland Office stated live animals subject to controls as specified in the relevant legislation (including sheep moving from GB to NI), will need to be accompanied by an Export Health Certificate.

If it is not possible to obtain a certificate for the flock, the Northern Ireland Office told the union that “in the short-term, the current sheep would need to be traded on the GB market to mitigate any immediate losses”.

UFU president Victor Chesnutt said: “We are utterly disappointed that the NIO have left it to just over a week before the NI Protocol comes into effect to outline that if our farmers are not able to get an Export Health Certificate for their sheep enabling them to enter NI, that the only other option is to sell the animals in GB.

“This is not a fair or reasonable suggestion to put to farmers who have invested money and time in purchasing sheep across the water as they would do every year.

Sheep sales for specialised breeds, such as Blackface sheep, only take place once a year – which is during September. This needs to be recognised as it is not as simple as going to a local livestock market which runs throughout the year.

“The biggest issue is the additional conditions that must be met regarding scrapie monitoring and genotyping.

“A high proportion of sheep entering NI cannot meet the new rules that are being applied as there are currently very few scrapie-monitored flocks in Scotland and under current arrangements, it takes seven years for a flock to become fully scrapie monitored.

“The UFU has made politicians in NI, London and Brussels aware of this issue for some time now. The need for an Export Health Certificate will have a serious impact on sheep farmers both in NI and GB.

“It will significantly minimise what has been to date, growing sheep trade between NI and GB, overnight.

“We cannot reiterate enough that in the UKG Command paper published on December 10, it stated that the co-chairs of the EU-UK Joint Committee are ‘securing additional flexibilities and adaptations to support NI businesses’. However, it is clear from NIO’s letter that family farming businesses have not been included in this.”

NSA regional development officer Edward Adamson said: “If it was just as simple as selling these animals it might be a way out, but the fact that NI buyers are no longer in the market devalues these animals, plus the cost of grass keep leaves NI buyers at a considerable loss through no fault of their own.

I have farmers phoning me in a worrying state of distress and anxiety but the answers we get back from the authorities show no sign of concern or compassion.

“In some cases, quite large sums of money are involved and livelihoods at risk if not more.”

In a statement sent to AgriLand, a spokesperson for the Northern Ireland Office explained discussions were “still ongoing”.

“The practical implications for farmers are understood and the issue has been raised with the EU. These discussions are ongoing,” it read.

A spokesman for the Scottish Government explained there are no centrally-held figures for the proportion of flocks in Scotland which are scrapie-monitored.