Tickets are available online for this year’s Farm Tractor and Machinery Trade Association (FTMTA) Grass & Muck event, to be held at Gurteen College near Birr on Thursday, May 17.

All of the working grass machinery demonstration plots are fully booked.

According to the FTMTA, demand for static stand exhibition space in the ‘trade village’ area has also been “very strong”.

It says that only a “very limited number” of spaces are available; machinery distributors or manufacturers (or anyone interested in exhibiting) are encouraged to apply sooner rather than later – if they haven’t already done so.

According to the association, once these are sold there will be no further stand possibilities.

The FTMTA says that this year’s event will be the largest ever; it is describing it as “the flagship event for the Irish farm machinery industry in 2018″.

The association says that 11,500 visitors attended the 2016 event; it hopes to see that figure exceeded this year.

A spokesperson said recently: “The focus at FTMTA Grass & Muck is very much on working machinery, with ongoing demonstrations throughout the day in the grass harvesting, re-seeding, silage pit, slurry spreading and farmyard manure spreading areas.”

Tickets for the upcoming event are available by clicking on this link.

Meanwhile, in other recent FTMTA news the association announced that a number of additional firms joined early this year.

Merlo UK – a subsidiary of the wider Merlo Group (a family-owned manufacturer of a range of telehandlers, attachments and forestry tractors) – is new to the FTMTA.

Also new to the association is Ardagh Agri Services; it’s a retail farm machinery dealership based in Ballina, Co. Mayo. 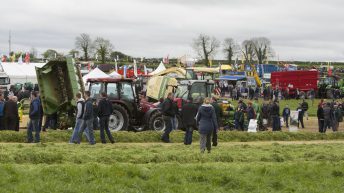