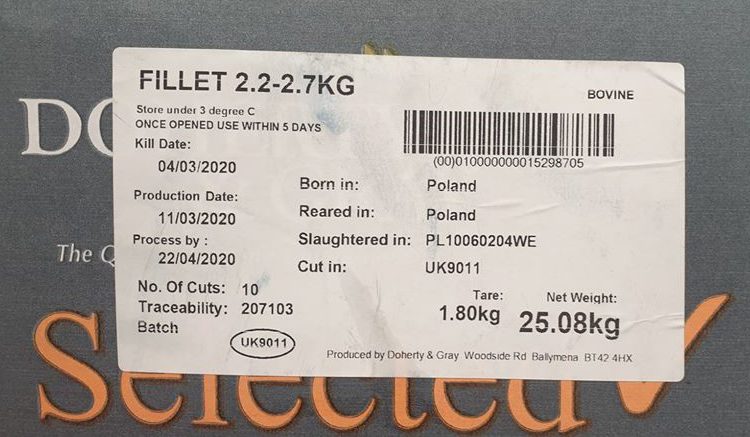 Another Northern Ireland processor, Doherty & Gray, has been accused of importing tonnes of Polish beef for sale locally.

It comes just two weeks after ABP was widely criticised for importing 400t of Polish beef for sale in Asda and Sainsbury’s stores in Britain.

For sale in Belfast

Images seen by AgriLand show a Belfast butcher shop advertising cut-price meat marked with Poland as its country of origin.

However, a whistleblower said the shop was likely “one of many” to be selling it.

It comes just weeks after parts of the Polish industry were under investigation by the European Commission for poor hygiene practices.

It’s not known exactly how much beef was imported in the latest consignment. However, it’s understood most of it was kept in cold storage, originally destined for the local foodservice sector.

“People really need to start asking where their meat is coming from – even if it’s from their local butcher. That doesn’t necessarily mean it hasn’t been imported,” the source told AgriLand.

Meanwhile, beef markets have continued to slide across the board. The latest Livestock Meat Commission (LMC) market briefing (published on April 15) showed prime cattle base quotes have fallen by a further 2-6p/kg. However, hogget prices have recovered slightly over the last week.

The Ulster Farmers’ Union (UFU) made the discovery of the imported consignment after several members contacted it with concerns of Polish beef being sold locally.

A spokesman said: “Farmers have listened to processors declaring difficult trading conditions and of further farmgate deductions that are yet to come, only to learn that their high-quality, local produce is being slighted for imported beef.

“Doherty & Gray’s beef sourcing tactics are threatening Northern Ireland’s local food security. It’s putting the livelihoods of farm families who’ve been keeping supermarket shelves well-stocked throughout the coronavirus (Covid-19) pandemic, in a disastrous situation which will have a knock-on effect on the entire nation.”

The union’s presidential team said it was “outraged” at this latest discovery.

“Doherty & Gray’s Polish beef imports is having a detrimental impact on our industry at a time when farmers are doing all they can to support the country in its efforts against Covid-19,” union leaders said.

We have spoken directly to Doherty & Gray to express our frustration and disappointment at their decision to import Polish beef. By doing so they have completely disregarded local farmers as well as consumers.

The UFU has urged Doherty & Gray to reconsider their sourcing policy immediately and is also appealing to all retailers and meat merchants to source product locally.

“We urge all local retailers and butchers to seriously consider their beef sourcing policies. Now more than ever there is a greater need to support your local beef farmers who are facing unprecedented challenges as a result of Covid-19.

“Yet they continue to work endlessly, producing high-quality food for the nation and ensuring it gets moved off-farm so that it can reach consumers.”

The UFU said the agricultural sector is facing these turbulent times together, therefore we must work in unity.

“Our farmers are doing their best to provide food at this difficult time and they deserve respect for this, not to be undermined by cheap imports. We ask consumers to support those shops and butchers selling local Farm Quality Assured meat products.

We can’t have the situation where processors are importing beef, damaging our local food security at a time when we farmers are needed to feed our nation and we take pride in doing so.

AgriLand contacted Ballymena firm Doherty & Gray. However, at the time of publication, no response had been received.