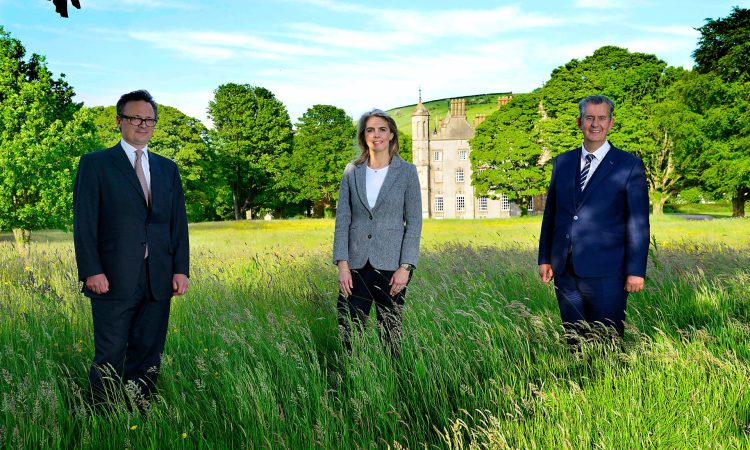 Northern Ireland could have its first-ever forestry project dedicated to the Queen’s Commonwealth Canopy (QCC) initiative at the Glenarm Estate, Environment Minister Edwin Poots has said.

Minister Poots visited Glenarm forest, part of the historic estate in Co. Antrim, ahead of submitting an application to the QCC initiative, that would see the area join a global network of forest conservation projects involving all 54 member countries, including Australia, India, the Maldives, Jamaica and Singapore.

The application will be submitted in partnership with the Glenarm Estate.

Minister Poots said: “The QCC is a unique, ambitious and exciting initiative that knits together forestry projects from across the Commonwealth, with the common goal of protecting one of the world’s most important habitats – our forests. I am delighted to submit an application, in partnership with the Glenarm estate, that will recognise Glenarm forest as part of this initiative.

“By creating this worldwide network of forests, the QCC will mark Her Majesty the Queen’s service to the Commonwealth and highlight the importance of preserving our forests for the future.

“I am particularly pleased to submit this application during Northern Ireland’s Centenary Year to ensure Northern Ireland can play its full part in the Commonwealth and to celebrate achievements over the last 100 years in NI.”

During the visit to Glenarm forest, the Minister heard plans for the ambitious 350ha project.

Around 180ha of primarily commercial woodland transformed over time and managed as native woodland, and will incorporate a further 170ha of designated semi-natural woodland and woodland pasture on the wider Glenarm estate.

The Queen’s Commonwealth Canopy (QCC), conceived by the Right Honourable Frank Field MP, was launched at the Commonwealth Heads of Government Meeting in Malta, in 2015. The QCC is a unique network of forest conservation initiatives, which involves all 54 countries of the Commonwealth. So far, over 45 countries are participating, with over 65 projects.

By creating a pan-Commonwealth network of forest conservation projects, the QCC hopes to raise awareness within the Commonwealth of the value of indigenous forests and to saving them for future generations.

Minister Poots continued: “Our woodlands are a hugely valuable natural resource, which benefit both our mental and physical wellbeing. They contribute to a healthy, quality environment, helping to capture carbon from the atmosphere as they grow, thereby improving our landscape and biodiversity. Glenarm forest is an excellent example of this and is enjoyed and loved by thousands of visitors every year, as well as the rich and diverse wildlife and fauna.

“This QCC application will also support and raise awareness of my department’s ‘Forests for our Future’ programme, launched in March 2020, which pledges to plant 18 million trees and create 9,000ha of new woodland by 2030.

“I am greatly encouraged by the response so far from a number of public sector organisations and many private landowners.

“Since the launch, my department has confirmed planting of 670,000 trees and are now processing recent claims for a further 1.1 million trees, planted earlier this year.

“I am committed to raising awareness of the value of our woodlands and saving them for future generations and I am delighted to work in partnership with the Glenarm estate on this significant project.”