AGCO is reportedly designing a bio-methane powered version of its Massey Ferguson 7700 Series tractors. A current-generation, diesel-powered version (a 7718 model) is pictured above.

The project is believed to be the first such foray into alternative fuels for AGCO’s Beauvais-built tractors.

According to La France Agricole, the goal was to find an alternative solution to fuel its Massey Ferguson 7700 Series tractors. All technologies were apparently considered, including hydrogen propulsion systems.

Bio-methane was reportedly chosen, because it offers a better relationship between the size and weight of the fuel to be carried on-board (on the tractor) and the resultant power available at the wheels (and the PTO).

Advertisement
The project reportedly involves squeezing 1,600L of pressurized bio-methane (at 250 bar) into tanks dotted about the tractor. The ‘fuel’ would be held in nine cylinders underneath the cab (instead of the diesel tank) and in a further two 130L canisters at the sides of the cab.

According to La France Agricole, the tractor’s engine (a bio-methane powered unit) needs to be moved – to make room for the ‘fuel’ tanks.

Because the transmission (Massey Ferguson’s Dyna-VT) is already “compact”, there is broadly enough room under the cab to accommodate the modifications.

Overall, compared with a ‘standard’ (diesel-powered) 7700 Series tractor, the bio-methane fuelled version would be 20cm higher and would have a slightly longer wheelbase.

AGCO – or Massey Ferguson to be more precise – has not announced when a working prototype tractor will be shown to the public.

Other manufacturers are also working on methane-powered tractor concepts, including New Holland.

New Holland intends to make those machines available to buy within the next three years; it’s had prototypes out working for some time. 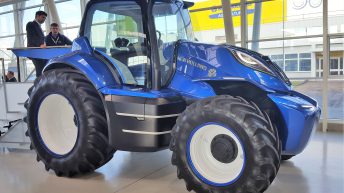