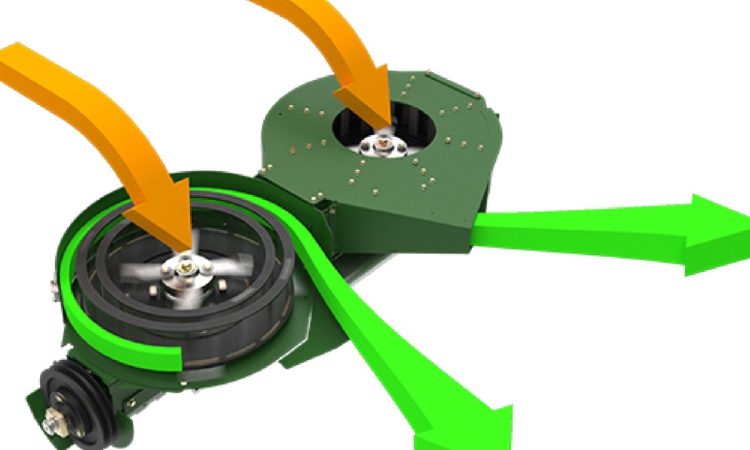 Eliminating volunteers and other weed seeds by spraying after they have germinated requires a further field pass and may not always be successful. A Canadian company has developed an alternative approach which, it claims, destroys 98% of weed and volunteer seeds before they hit the ground.

The company in question is Redekop of Saskatchewan and its latest device is what amounts to a small mill attached to the rear of the combine.

Seeds and chaff that would normally fall into the straw before it exits the combine is passed through a twin set of rotors, each rotating at 2,850 rpm.

These rotors have three modes of action. They impact and then accelerate the seed up to 400kph. They also create a strong airflow that carries the cracked seeds through three concentric rings of fixed posts, further pulverising them.

Having been broken up the debris is fed back into the straw as it leaves the combine. The extra volume of air will further aid the distribution of the straw if it is being chopped and spread.

Although the mills are said to have a modest power requirement the company notes that similar devices already on the market can absorb 35hp when “running dry”. With this new seed pulveriser that situation is avoided as it can be switched out of action when not required.

The unit can be slid out of the way for maintenance. The blades are both reversible and tungsten carbide coated to prolong service life. A mechanical drive system taps into the combine’s driveline.

Presently the system is only available for John Deere S series combine but there are plans to make it available to a wider range of machines.

Redekop was established in 1985 and specialises in manufacturing equipment for residue management. It’s range is based around a series of straw choppers and chaff spreading aids which are supplied as after-market fitments, or directly to OEMs.