Revisited: Inside the gates of a 50,000 head feedlot in Texas

Up next is the first of the international beef farms that AgriLand visited in May 2019 - as part of ONE19: The Alltech Ideas Conference - the Wrangler Feedyard.

This feedlot is one of 10 feedlots operated by Cactus Feeders - located close to Tulia, Texas. The company - established in 1975 - feeds and slaughters 1.2 million steers and heifers annually - making it one of the world's largest feedlots.

To put this into perspective, the total Irish kill in 2018 amounted to over 1.79 million cattle, with steers and heifers accounting for over 1.15 million head.

The company - which operates beef feedlots from the centre of Texas to south-west Kansas - has 800 employees, with pork operations also located in Iowa, North Carolina and Georgia.

This particular unit has a 50,000 head capacity, with 46 employees which work across many departments including: administration; feed division; 'the hospital'; repair and maintenance; and research.

The entire operation - which encompasses 500ac and is 100% employee owned - is overseen by the feedyard manager, Randy Shields, with Dr. Ben Holland heading up the research department.

Some 465 pens are located on-site, with 175 pens (14,000 head) dedicated to research which revolves around liveweight gain, carcass weight and feed intakes.

Cattle are sourced from almost every state in the US - including Hawaii. As such a mixture of breed types can be identified at the yard due to the animals originating from a variety of different environments and climates.

In addition, more than one million cattle are also imported into the US from Mexico every year - with a proportion of these finished by Cactus Feeders.

The majority of yearlings bought for the feedlot in the US are sourced from cow/calf operations - suckler herds in other words.

Interestingly, in the US cattle industry, the average cow/calf herd is approximately 35-40 head, with 80% of the calves born on ranches or farms where there are less than 100 cows.

With 750,000 cow/calf operations nationally, producers are located from as far afield as Florida and Montana. Again, this lends to the diversity of breed types available for feeding.

Furthermore, the US national dairy herd (majority Holstein Friesian) stands at approximately nine million cows. While sexed-semen is used to breed replacements from top-performing cows, there are dairy-origin calves available for beef production.

However, similarly to Ireland, there has been more emphasis placed on beef cross-breeding on the dairy herds to improve carcass quality.

Overall in the US there are four major beef packers - Tyson, JBS, Cargill and National Beef. At Wrangler Feedyard the majority of the cattle are slaughtered at a Tyson Foods plant located 45 miles away just outside of Amarillo, Texas. 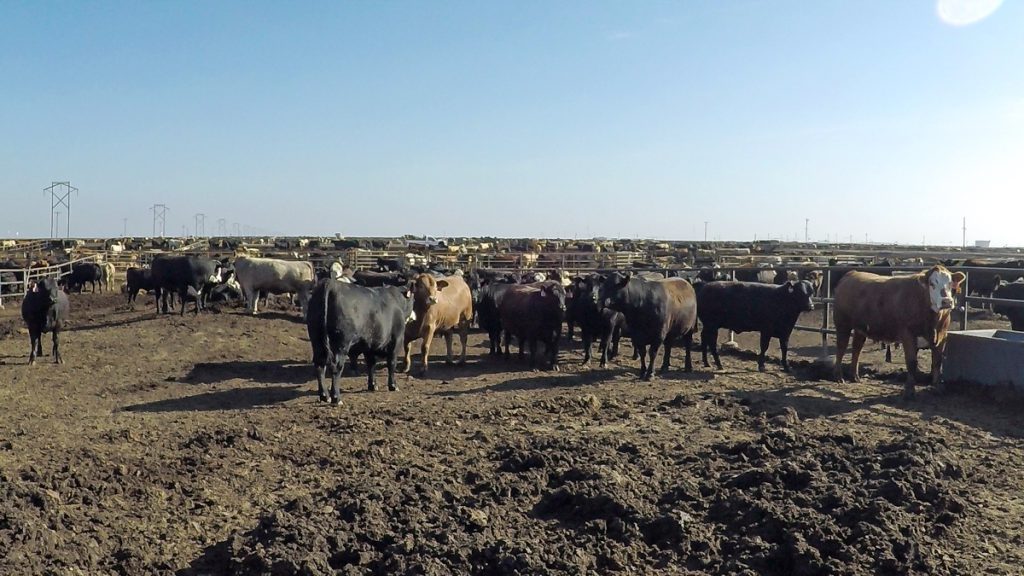 How does it operate?

Heifers and steers arrive on farm in truckloads of 70. Once the cattle meet the feedlot's 'expectations' - as they may have been bought by text message or over the phone - they enter the receiving pen located close to the loading/unloading bay.

They are fed a starter diet top-dressed with roughage and allowed to settle for 18-72 hours. Then, they are moved to a processing barn where they are vaccinated, tagged and wormed.

Furthermore, this is where they also receive growth promotion hormone implants - under the skin and behind the ear - this will be examined in detail later in the article.

Once completed, cattle are moved further up the feedlot and - all going well - will remain at this location until slaughter.

As cattle are sourced from various locations and environments, exposure to disease is an on-going issue; however, mortality across the company stands at 1.5%.

Pens and animals are inspected daily by a 'pen-rider' (on horseback), with each employee responsible for 8,000-10,000 head.

Common illnesses include bovine respiratory disease (BRD) and lameness. If a sick animal is identified, it is taken from the pen, evaluated and treated accordingly at 'the hospital' facility on-site.

The cattle pens are 60ft wide and 175ft long; a concrete slab is located behind the feeding trough and water tank. In addition, 9in of bunk space is allowed per animal when feeding.

When a pen of cattle reach slaughter weight, pens are scraped and manure mounds are built. This is then spread on pasture by local farmers or turned into compost. 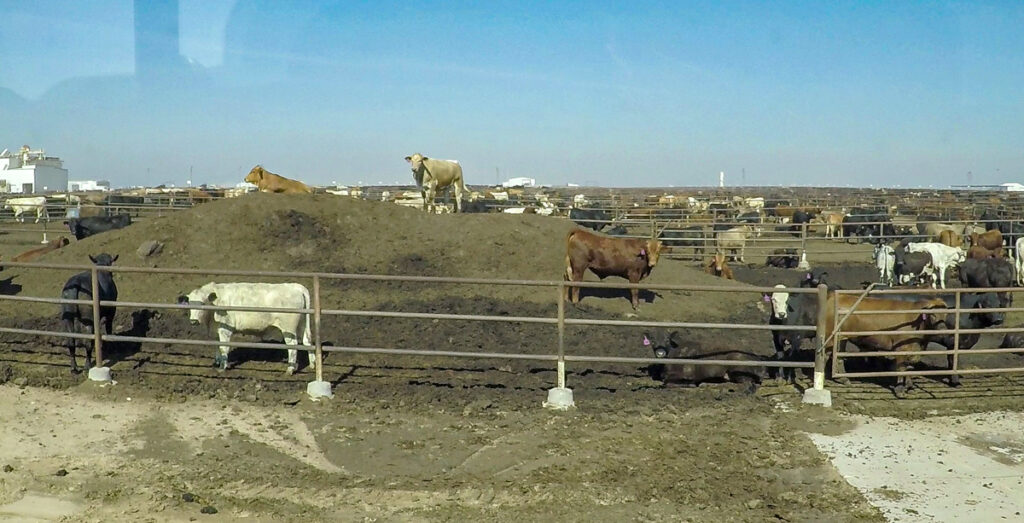 Due to the shear volume of cattle on the feedlot, 13 wells are located on-site. All these wells pump water to a tower that has the capacity for one million gallons of water which feeds the water troughs in the pens.

All feed is mixed at the on-site mill with the exception of the starter mix; the mill is located close to the entrance of the feedlot.

The starter feed is Cargill's Ramp product - which is green in colour and made up of predominately Sweet Bran - this includes: trace minerals; calcium; macro minerals; and urea.

As mentioned above, this is fed when cattle enter the receiving pens and the feed is top-dressed with roughage for 7-8 days.

From day eight, 85% Ramp is fed and 15% of the finishing ration is introduced for approximately three days.

Over the next 25-28 days, the Ramp percentage is reduced and the higher energy ration is increased until a full transition is achieved.

The batch mill starts at 5:00am; corn is steamed and flaked - resulting in a 12-15% improvement in energy value - and mixed with other ingredients.

These include: corn stalks (7% dry matter); wet distillers (30% crude protein and 10% fat); and Sweet Bran - all mixing can be monitored from a control room or from the loader. 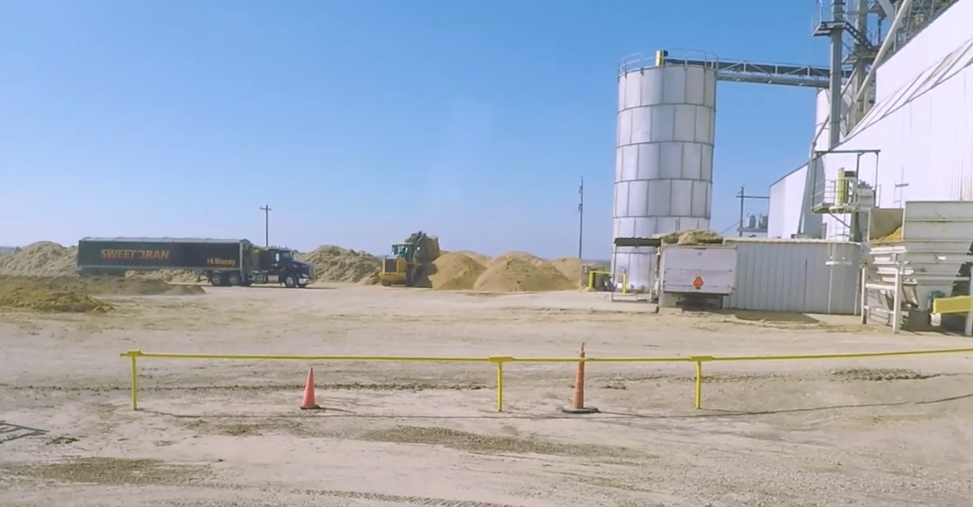 A total of three feed trucks and one roughage truck are responsible for bringing feed from the mill to the troughs. These trucks are equipped with weight cells and GPS systems, which will prevent the wrong ration being distributed to the wrong pen. 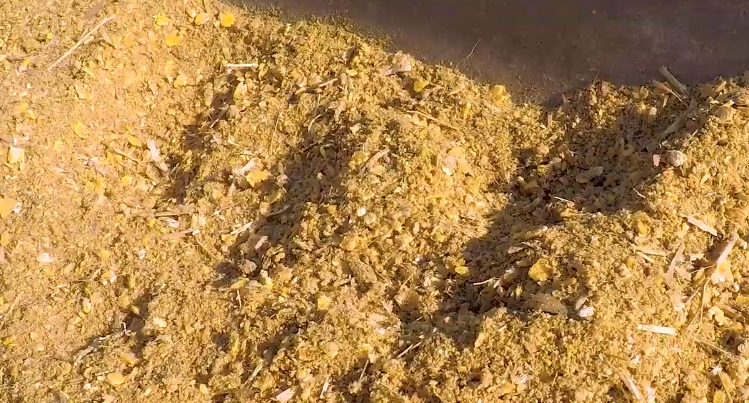 In conjunction with the above ingredients, micro-ingredients are mixed with water and form a slurry-type liquid which is pumped into each batch; vitamin A and D are supplemented to the animals.

Now, this is where the ingredients get interesting.

Feed antimicrobials are added in the form of Rumensin (monensin) and Tylan (tylosin).

Tylosin is fed to prevent liver abscesses, while monensin aids rumen efficiency. Both are approved by the Food and Drug Administration (FDA).

Dr. Holland noted that the addition of tylosin is becoming a growing concern among some consumer groups in the US due to antimicrobial resistance.

However, he explained that liver abscesses lead to condemned livers which are a huge problem for meat packers. When identified, the line is slowed down which can cost "thousands of dollars".

MGA is also fed which prevents heifers from cycling, while beta-agonists are included in the last 28-42 days prior to slaughter - with the potential to increase steer carcass weight by 15-16lb (6-7kg) in 28 days.

On a national US front, Dr. Holland stated that controversy around beta-agonists is not very high. However, from an export market perceptive - particularly in relation to China - he says it is considered more problematic.

Finally, a small amount of glycerin originating from bio-diesel plants and waste fat from restaurants are also included. 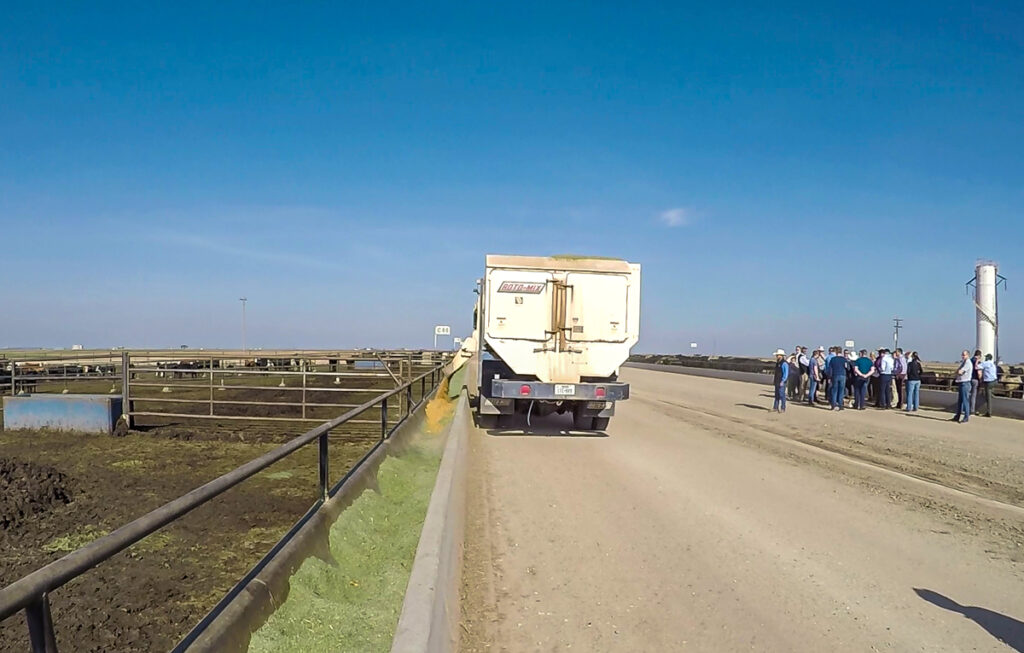 As already stated implants are given to animals in the processing barn. Dr. Holland outlined that these implants pay out over a long period of time.

"The implant programme at the feedyard results in approximately 60lb of beef and 120lb of liveweight on every animal that is slaughtered without any more feed or water.

Dr. Holland continued to explained that average beef consumption per person per year in the US stands at approximately 55-60lb per person.

"Every time we implant an animal on the feedlot, we feed a whole extra person. So, where else are you going to produce something that is of high quality for $0.10/lb? It's tremendous technology and it's unfortunate that many folks in the world don't have it," he explained.

He added: "We have confidence that they are safe and that they do work."

Commenting on the issue of using these implants, he said: "I know this is an issue and it's one of the reasons why we are not exporting beef from the US into Europe.

But, we have been using this technology [implants] since the mid-1950s. If you measure the hormone concentration of beef from an implanted animal and a non-implanted animal, the difference is negligible.

"From the androgen side - the testosterone you are feeding intact males [bulls] is substantially more than in a castrated male with implants in the US," he said.

The feedlot is currently receiving a beef price of approximately $2.00/lb or €3.94/kg.