I arrived in Kings Lynn, Norfolk, on July 7 to carry out nine weeks of crop placement on a highly industrialised, 2,500ha tillage farm.

The farm, Barton Bendish Farming Ltd, sows 2,240ha of crops annually with the remaining 260ha either in environmental schemes or left fallow due to poor ground conditions around the time of sowing.

As I was tying up final arrangements for the trip with the farm manager, Richard Bailey, over the phone, one thing I was promised was that there wouldn’t be a shortage of overtime here.

Upon my arrival, the farm manager picked me up at the train station, I was greeted with a handshake and a warm welcome.

On our journey back to the farm, I was immediately taken aback by the size of the fields and the fact that we seemed so isolated and surrounded by nothing but ripening crops. He commented on how such a poor year will have a detrimental effect on crop yields and ultimately, returns.

Barton Bendish farming Ltd. farms under the company Albanwise Farming Ltd. and is a sister farm to three other tillage operations- one in Norfolk and two in Yorkshire. Albanwise sits on 8,000ha of arable land.

There was a wide range of modern machinery and tractors owned by the farm including a Claas lexion 780 with a 40 foot header, which is capable of harvesting over 70t of grain per hour.

Two Cat Challengers with approximately 400hp rating on tracks, numerous modern John Deere tractors, a Bateman RB35 sprayer and many cultivation implements were among the other machines on the tillage farm which sits on the east coast of England.

The farm owns numerous grain stores which can hold 14,000t of crops altogether when full. The dryer on the farm is capable of working at a rate of 50t per hour.

Tasks during my first two weeks on the farm involved completing pre-harvest jobs like cleaning out grain stores followed by spraying and smoking out the sheds to kill any remaining insects.

The size and scale of the sheds was breathtaking; one of the sheds could hold 5,000t of grain. Standing in it empty was like standing outside with a roof over your head!

I found the pre-harvest jobs to be mostly dust related and I wouldn’t describe this as pleasant. It’s safe to say I enjoyed getting home from it in the evenings!

The combine started up on July 19, with the winter barley first up for harvesting.

Before I left, there was about 200ha of winter wheat left to harvest, along with 180ha of spring beans, 114ha of maize and 135ha of sugar beet.

The scale of the farm and the amount of crops to harvest meant there was little to no time off for a period of six weeks.

Hours are long and sleep turns rare with five hours per night not unusual. Work starts at 7am and we could stay harvesting until 12 that night. This would mean 17 hours corn carting if the weather is half decent.

I carted with a Richard Western trailer capable of holding 16t of grain.

The cab of the John Deere becomes your second home so it is important to have it stocked up with enough food and water for this time. My consumption of jaffa cakes was through the roof!

I found the lack of sleep to be slightly overwhelming at first but my body clock slowly adjusted to it. We entered a 35ha field one day and I thought we’d never come out of it!

As my harvest 2016 on the farm ended at Barton Bendish, it’s safe to say it was a new, worthwhile experience and two months I will never forget.

Having learnt lots about large scale cropping in a foreign country, I jetted back to Ireland on September 3, already booked at home for the evening milking! 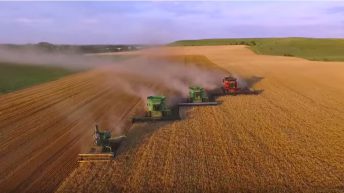