Home » Beef » The use of clover in beef production systems

The use of clover in beef production systems 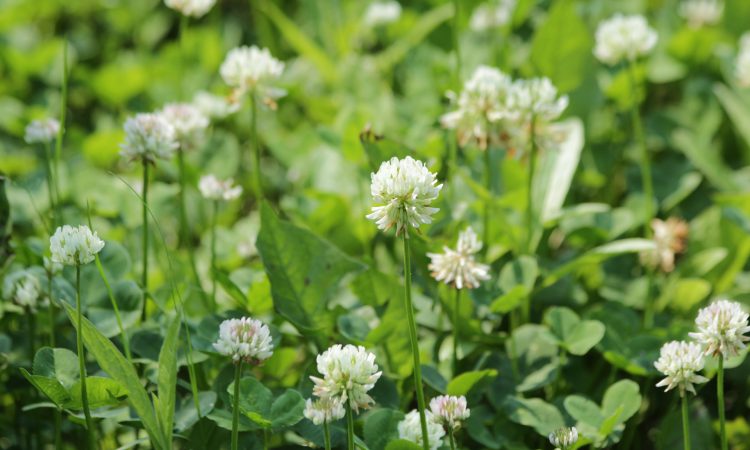 Making best use of clover in beef production systems was one of the main themes addressed in a recent beef webinar.

AFBI’s Dr. David Patterson confirmed that clover’s inclusion in grass swards can act to reduce the carbon footprint of a beef enterprise by 19%.

“Many studies have confirmed the benefit of including clover in grass swards. Work has shown that grass / white clover mixes, given 5 kg of N/ha can carry 86% of the stock recorded, for a pure ryegrass sward receiving 360kg/N,” he said.

“Meanwhile, other trials have shown that grass / white clover mixes given no N at all, can carry 85% of the stock recorded for a pure ryegrass sward receiving 400kg/N.

“We also know from trial work that grass / white clover mixes receiving 50kg of N/ha can produce 90% of the carcass gain, per hectare of cattle grazing pure grass swards receiving 220kg of N.”

According to Patterson, beef farmers do not rely on white clover within their swards for a number of reasons. These include the different management required, as opposed to simply applying fertiliser N to grass.

Clover can also be unreliable as a source of dry matter (DM) during the spring months, while there is also the perception of it having poor persistency in swards.

“When it comes to managing mixed clover swards, AFBI recommends the spring application of 50kg of N/ha,” Patterson continued.

“In addition, soil pH should be greater than 6 with K and P indexes both coming in at 2.0.

“It is important that swards are grazed down tightly during the period April to June. Continuous grazing with sheep should be avoided,” he added.

“Swards should be grazed cleanly during the autumn months in order to maintain a high clover content the following spring.”

Over sowing is one option when it comes to establishing clover within an existing grass sward.

“In such circumstances, all relevant weed burdens should be addressed. The clover seed should be stitched into an open sward, such as that existing after a cut of silage has been taken,” Patterson added.

“The swards should be grazed seven days after the seed has been sown out and then, again, seven to eight weeks later.”