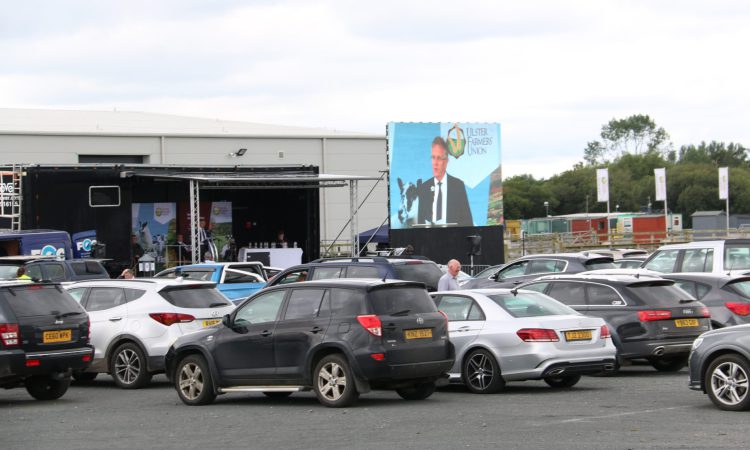 The Ulster Farmer’s Union (UFU) is understood to have ruled out plans for another drive-in AGM, despite its success in 2020.

The innovative outdoor event took place at Balmoral Park in July, with the AGM even seeing an increase in attendance compared to previous years.

Cars were spaced 2m apart in front of a stage, with live-feed video footage displayed on a large screen. Members had the option of listening through speakers or their car’s radio. The event was also broadcast online.

However, with no elections taking place this year, it makes the expense of the event harder to justify. The cost of the drive-in event is understood to have come to more than £10,000.

This year’s AGM will take place on Wednesday, April 28.

Northern Ireland Agriculture Minister Edwin Poots and Stormont Agriculture Committee chairman Declan McAleer are understood to have been approached to speak at the 2021 event.

Ballycastle beef and sheep farmer Victor Chesnutt is also set to lay out his plans for his final year at the helm of the organisation.

Changes to the organisation’s voting rules are also expected to come up in discussions. Earlier this year, the UFU confirmed it was reviewing changes to its election procedures following requests from some members last year.

Changes were made ahead of the last AGM to allow voting to take place online during the union’s drive-in conference. However, in previous years members would have had to physically attend the event to cast their vote.