A deal on the departure of the UK from the European Union has been agreed this morning, Thursday, October 17, in Brussels.

The President of the European Commission Jean-Claude Junker took to Twitter this morning to outline that a deal has apparently been reached.

In the tweet, the president said: "Where there is a will, there is a deal"; and added "we have one".
[no-app]

🇪🇺🤝🇬🇧 Where there is a will, there is a #deal - we have one! It’s a fair and balanced agreement for the EU and the UK and it is testament to our commitment to find solutions. I recommend that #EUCO endorses this deal. pic.twitter.com/7AfKyCZ6k9 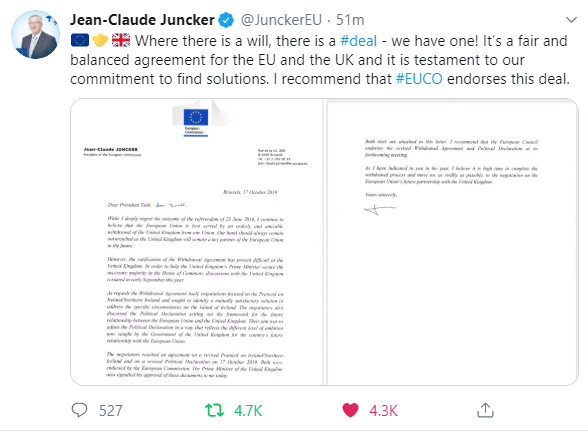 He noted that the deal "is a fair and balanced agreement for the EU and the UK and it is a testament to our commitment to find solutions".

Concluding, President Junker said: "I recommend that the European Council endorses this deal."

In a letter from Junker to the European Council's President Donald Tusk, he said: "The negotiators reached an agreement on a revised protocol on Ireland / Northern Ireland and a revised political declaration on October 17, 2019.

"Both were endorsed by the European Commission. The prime minister of the UK also signalled his approval of these documents to me today."

Meanwhile, the Democratic Unionist Party (DUP) has issued a statement this morning, Thursday, October 17, outlining that the party “could not support what is being suggested”.

The statement from Arlene Foster and Nigel Dodds noted: “We have been involved in ongoing discussions with the Government.

As things stand, we could not support what is being suggested on customs and consent issues and there is a lack of clarity on VAT.

Concluding, the statement added: “We will continue to work with the Government to try and get a sensible deal that works for Northern Ireland and protects the economic and constitutional integrity of the UK.”

The statement from the DUP comes ahead of today’s EU summit in Brussels.