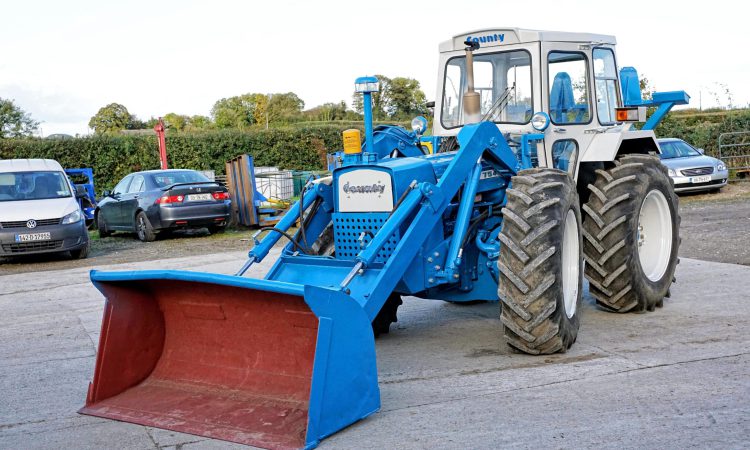 County tractors were, generally, regarded as the ultimate for ploughing, and in their heyday, these heavy-duty beasts were the ‘go to’ tractor for farmers and contractors working on hard clay soils.

They also had an equally deserved reputation for being expensive, around twice the price of the tractor they were based on, and that has changed little over the years.

Indeed, hardly a month goes by without examples fetching eye-watering amounts at auction.

But not all of them were destined for field work. Some were specially built for other tasks including land clearance and drainage. They shared the same solidity of build which has stood them well over the years.

One such adaption has recently undergone a full nut-and-bolt rebuild before returning home to Littleton in Co. Tipperary.

The machine in question is a County 1164, built in 1974. These were popular machines, based on a beefed up Ford 5000 back end, and powered by Ford’s ubiquitous 401 six-cylinder engine that originally appeared in the 8000.

It was rated at 116hp, and those that weren’t exported would often be found on the heaviest of soils pulling a furrow or two more than lesser tractors of similar power, but with drive to the rear axle only.

Although the Countys were usually regarded as Ford conversions, despite being made from an assortment of Ford parts, this did not stop them being adapted further to meet specialist needs.

One organisation with specific demands was the UK Ministry of Agriculture which took delivery of a special build County 1164 in 1974 for land drainage work.

In addition to equal-sized four-wheel-drive, the tractor gained a 15t Boughton winch and a Leeford front end loader, both of which are still with the restored machine, and were put to good use over the 30 years that it was operated in Ireland by its current owner.

T.T. Boughton and Sons is a well respected company within classic tractor circles.

It started off as a farm contracting concern back in the late 19th century and went on to develop equipment for forestry clearance and timber recovery during the second world war.

Based in Buckinghamshire the product range eventually extended from winches to airport crash tenders, along with pumps and lorry mounted skip loaders.

Military equipment also featured large in its portfolio with attachments for tanks and materials handling vehicles.

The company eventually succumbed to cash flow problems in 1997 and certain parts of the business were taken on by the newly created Ulrich Attachments. This firm is based in Aylesbury, not far from Boughton’s original works.

The winch fitted to this tractor is a two-speed unit with a pulling capacity of 15t and it still works perfectly.

Somewhat less is known about Leeford (London) Ltd. which manufactures the front end loader. The company was active in the 50s and appeared to be owned and run by a gentleman by the name of L. F. Leibrecht.

The main product line at that time was trenching equipment which could be fitted to ordinary tractors, the Fordson in particular.

He had also expressed an interest in half track conversions, although nothing seems to have come of it.

Quite where the equipment was manufactured is unclear, but his office was in central London, overlooking Hyde Park. This location might have been calculated to impress the UK government rather than the average farmer, for drainage and land improvement was still a publicly financed priority at the time.

Putting it all together

The combination of the County tractor, the Boughton winch and the Leeford loader would have made an impressive sight back in the mid-70s.

All are solidly built with plenty of metal going into their construction and the fact they are still in good working order is testament to the build quality.

The loader is mounted on a frame that runs between the two axles and has a cross member running under the dashboard. As such, it becomes part of the tractor’s structure and lends the whole unit greater rigidity and extra ballast.

The winch attaches directly to the back axle and utilises the power take-off (PTO) shaft as its power source.

An integral ground anchor is positioned at the rear of the frame and folds up vertically when not in use.

Michael purchased the tractor in 1990 at a cost of 3,000 Irish pounds. At the time, he was felling trees and supplying hardwood to a UK timber merchant.

Much of the loading was done by hand so it is little surprise that he had sought an easier way of doing things.

The County certainly made life easier and it would often be extracting and loading up to 50t of timber a day.

Altogether, he believes that it has done 18,000-20,000 hours over its working life with few, if any, mechanical issues.

Times change and so do businesses, as part of the continual development he had invested in more specialist equipment for forestry work and the County was semi-retired.

It was still used for occasional jobs and was never left neglected or unserviced.

However the years take their toll, and so it was that he decided for it to undergo a full nut and bolt restoration, a task entrusted to Mark Osbourne of County Tractor Spares Ltd. in Hampshire.

That was in early 2020, and after 18 months of restoration, she eventually arrived back in Co. Tipperary this October. The total cost of the restoration was around £70,000 but Michael doesn’t regret a penny of it.

Worn but not broken

Despite the high hours, it was by no means in a terminal state of disrepair. When the engine was stripped down it was found to have been ‘caught just in time’.

Everything was still functioning, yet it would not have been long before major repairs would have been needed.

Furthermore, the clutch was still the original item, despite three decades of hauling and loading timber. Michael certainly knows how to look after his machinery when driving it, as the transmission was still in excellent order.

However, all was not well with the piping and so it was completely replaced, as was the valve block, to complement a very well detailed cab refurbishment.

Neither was the loader quite as it should have been. The left hand boom was half an inch shorter than the right, necessitating a cut and fill repair to its mounting point with extra plating to ensure its strength was preserved.

The tractor played a huge part in Michael’s business over the years and was the foundation upon which it was built.

While it was away being restored, he did entertain the notion of putting it back to light duties, but now that it is finished and in the yard, such ideas have been banished for good.

Neither has he any intention of parting with it. The cost of restoration may have been high, yet if it had not been for his careful working of it over the years, they would have been higher still.

Michael will never sell the tractor so the question as to its value is rather academic. However, it has been suggested that £145,000 would not be far off the mark, around twice the £73,000 it has cost him. Not that bad a buy after all.