Video: A high-spec Deere ‘talks’ to a spreader…to boost accuracy 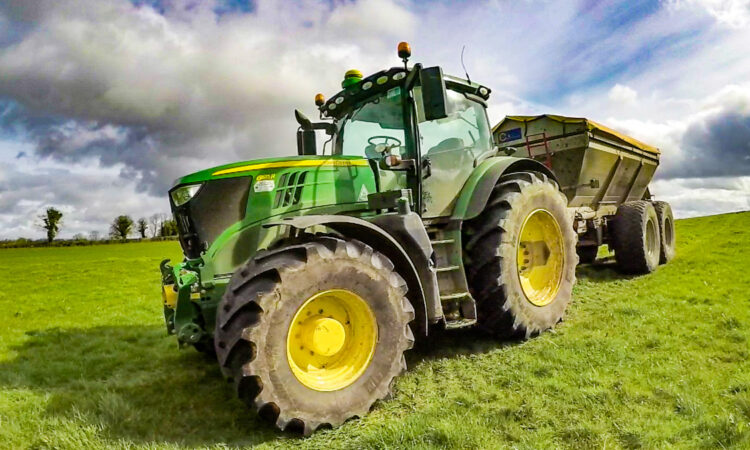 ISOBUS is an international technology protocol, that allows tractors to communicate electronically with compatible implements, regardless of brand or manufacturer.

But how is this technology benefiting farmers and contractors on the ground – here in Ireland? To find out more, Agriland paid a visit to one of a growing number of enthusiastic converts.

Paul Boland – a contractor – is originally from Co. Westmeath but now lives across the boundary with Offaly in Ballycumber. Work includes mowing and hedge-cutting.

Spreading fertiliser for midlands-based J. Grennan & Sons keeps him busy each year from March through until September. He uses his own John Deere 6195R to pull a tandem-axle Bredal K125 spreader (which is owned by Grennans).

Boland works across a catchment area that encompasses areas such as Tullamore, Athlone and Mullingar – and anywhere in between.

The 12-year-old, tandem-axle spreader holds 16t; Boland typically spreads between 30t and 50t on any given day. Most spreading is on grassland, though some tillage ground features in the mix also. Some jobs involve quite long runs – from the depot to the farm and back.

Covering such a wide area and handling such a significant tonnage, Boland wanted to spec up the outfit for maximum accuracy – and to make the long working days a bit easier.

He explained: “I bought the 6195R in February of last year; it replaced a 7530. I liked the 7530, but the 6195R is a big step forward. The DirectDrive transmission is much more user-friendly than the previous AutoQuad box. You can change up and down through all the gears, using fingertip controls.

The 6195R is also a more stable tractor. It weighs about 9t, whereas the 7530 was more like 7.5t. That makes a difference when you’re hauling a spreader as big as this about all day.

“When I originally ordered the tractor, the dealer – TFM – advised me to go for the GreenStar (GPS guidance and mapping) and AutoTrac (automatic steering) systems. The tractor also came ISOBUS-ready. I’m glad I followed the advice. In fact, I wouldn’t buy a tractor without these systems now.”

He continued: “When Grennans saw the various systems on the tractor, they could see the potential benefits for spreading right away. They organised for the existing control unit on the spreader to be swapped for an ISOBUS-compatible unit – so that the spreader could communicate with the tractor and make full use of its technology.

“A new Teejet ISOBUS controller was installed on the spreader by Atkins – the Cork-based Bredal importer. Once it was linked to the tractor via a data cable, TFM was really helpful. They got the tractor set-up; now the spreader can be fully controlled from the tractor’s own in-cab screen. It does away with the need for additional monitors, control boxes and cables.”

“The icing on the cake was the ‘section control’ software, which needed to be uploaded to the tractor. That cost over €1,600, but it’s what really allows the tractor to take automatic control of the spreader.”

Boland explained that the outfit now offers a range of features.

“The GreenStar system maps where I go and exactly which parts of the field have been spread. All this information is recorded, along with data I input – for example, the type of fertiliser. The AutoTrac system automatically steers the tractor along each bout; I only need to take control of the steering wheel when turning at the headland.

It is capable of mapping out curved bouts (paths). For this sort of work I don’t really need that; it’s better to stick to straight lines – regardless of the shape of the field.

“The ISOBUS link between the tractor and spreader means that the 6195R can automatically vary the application rate – or switch it on and off. For example, when I get to the headland or any other part of the field that has already been spread, the tractor will close the shutters on the spreader – cutting off the flow. It also opens the shutters automatically, when needed.

“This boosts accuracy and saves fertiliser – in every field and on every load. When you’ve got a 16t spreader behind and you’re working at widths of either 20m or 24m, that’s important. Since I’ve started using this technology, I’ve spread 2,000t across 6,500ha. The tractor, along with other work, has over 1,500 hours on the clock.

“All in all, I’m very happy with the 6195R – not just the GPS, auto-steer and ISOBUS-ready technology – but also the tractor itself. It uses just 400L of AdBlue for each 1,000 engine hours. From talking to people using other well-known brands, that’s fairly economical.

“The only concern I have is the front tyres. The 6195R has MachXBibs, whereas the 7530 had MultiBibs. I got four seasons out of the MultiBibs – and the 7530 almost always carried a front weight block. The way it’s looking, I doubt I’ll get two full seasons out of the MachXBibs on the front of the new tractor. John Deere has been chasing this up with Michelin; I’m sure something will be sorted out.”

According to Boland, the GreenStar, AutoTrac and associated systems probably added in the region of €7,000 onto the price of the tractor. He says that the investment was well worth it, but cautions that you need the support of a dealership like TFM to get the best from it.

The back-up service from TFM has been second to none. They have people who know how to set these systems up – and make sure everything works like it should.