Warm sunshine set the scene for the first day of Balmoral Show 2015, with an estimated 20,000 people in attendance.

A 32-month-old bull – Dermotstown Del Boy – swept the boards in the Simmental classes for the second successive year.

“We bought him privately at eleven months of age, after seeing him compete in a young bull class at Tullamore Show,” said Leslie Weatherup, who owns the bull in partnership with his son Christopher.

“He stood out that day and has not disappointed since, given his achievements over the past couple of years”.

It was also a day to remember for the Connolly family from Ballynahinch in Co Down. They won the Charolais championship with their 4-year-old cow Wesley Glamorous. She was purchased at a dispersal sale in England as a calf.

Albert Connolly established the Brigadoon herd back in 1979. The family has taken part in most Balmoral Shows since. In addition to the breed championship victory the Connollys also won the Group of Three class and the Reserve Junior Bull Championship.

“A good showing at Balmoral means a lot when it comes to selling stock at all the main breed sales held throughout the UK and Ireland.

“These are particularly upbeat times for Simmental cattle. The cattle are recognised as being the foundation stone for top quality suckler beef production,” he added.

If you couldn’t make it today, below is a flavour of what was happening:

Video thanks to Ulster Bank and JPR. 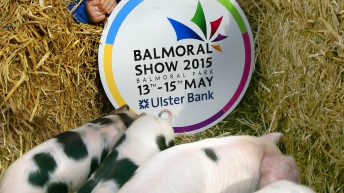 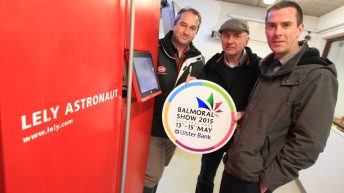