Home » World News » Video: Blind sheep fitted with halo to stop him from bumping into things

Video: Blind sheep fitted with halo to stop him from bumping into things 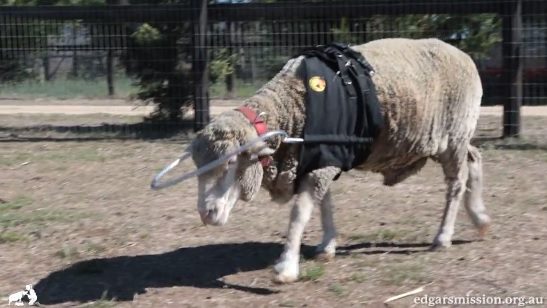 A blind sheep in Australia has been fitted with a halo around his head so he does not bump into things on the farm.

The 12-year-old sheep, named 64, was found in a car park and brought to Edgar’s Mission, a farm sanctuary in Melbourne.

In the video below, Pam Ahern, co-founder of Edgar’s Mission explains about 64 and his halo.

“This is our friend 64, he’s blind he cannot see anything and this is his friend Annabelle and she’s got a bell on.

“He does have trouble, he bumps into things so we have this cool vest for him.”

The halo took a little bit of getting used to. It was designed for a dog, which doesn’t bend its head down quiet as much as him.

“But you can see it’s working really well for him it stops him bumping into the fences and gives him much more confidence walking about the paddock.

Speaking to ABC News Australia, Ahern said that 64 would not have had much chance of surviving to his old age.

“He had obviously been living as part of a herd that protected him, because he wouldn’t have survived long alone being blind.

“He wasn’t socialised with humans; he was absolutely terrified of humans.”

The video shows 64 roaming around the paddock along with Annabelle and the other sheep.