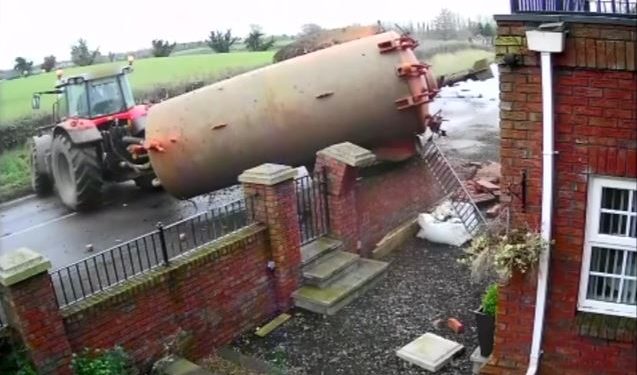 Footage from CCTV cameras captured the moment a slurry tank crashed through a garden wall in Northern Ireland on Friday, February 10.

The accident occurred when the tractor pulling the slurry tank was involved in a road traffic collision with a car on the Belfast Road, Glenavy in Co. Antrim.

Reported at around lunchtime on Friday last, the footage shows a Volkswagen car colliding with the front wheel of a Massey Ferguson tractor.

No injures or further details were reported, according to the Police Service of Northern Ireland.

Following the crash, the Abbey slurry tank was sent flying through the garden wall at the front of the house, coming to a halt on its side on top of the remainder of the wall.

The tractor luckily remained on all four wheels and the driver can be seen getting down off the tractor quite quickly and seemingly uninjured.

The slurry tank reportedly missed the wall of the house itself by less than one metre.

The road was reportedly closed for a time on Friday, while the car, tractor and slurry tank involved in the crash were taken away.

Some oil also had to be cleaned up before the road was allowed to be reopened.