A group of cyclists in Spain stopped in the middle of their journey to help some farmers with a cow who was having some difficulties calving.

It was believed that the cow had been in labour for up to five hours without the farmers being able to deliver the calf successfully.

The group of cyclists stopped to lend a hand to the farmers, with one member of the group, named Jose Faraldo, stripping down to his waist and taking charge of the situation.

Faraldo delvers the calf without a calving jack after just a few minutes, with only a few ropes close at hand.

Both the dairy cow and calf were in obvious distress following the birth, with the farmers acting quickly to make sure the calf was alive and moving.

Once the calf was born and seemed to be alive and well it was placed beside its mother, who had recovered slightly having collapsed during the final moments of the birth.

The entire procedure was captured on camera and was uploaded to Facebook and Youtube recently, where it has amassed over 200,000 views.

Some of the cyclists later returned to the farm to check on the cow and calf, who were reportedly doing fine.

This isn’t the first time this cycling has stopped to help people in need, according to the club’s Facebook page.

In the past they have helped to pull a car from a ditch, helped people who were lost in the mountains, assisted in putting out a small fire as well as releasing an animal from a barbed wire fence.

A farmer in Ireland was surprised when one of the cows in his dairy herd gave birth to triplets, something he has never seen on his farm.

Shane Fitzgerald, from Portlaw, Co. Waterford, arrived out to his shed on January 9 to the surprise of triplet Holstein Friesian calves, two bulls and a heifer.

I’m in a farm partnership with my father and he’s never seen triplets either. He couldn’t believe it when I told him.

“The cow calved them herself and she was 11 days before her time – she wasn’t due until January 20,” he said. 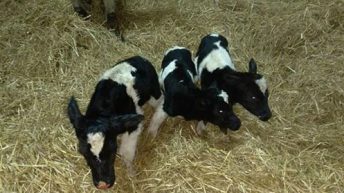