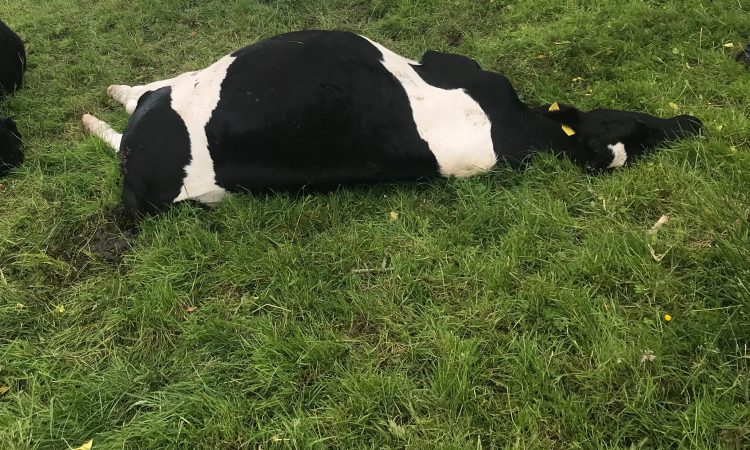 “I went up on the Tuesday morning to check them and give them a bit of grass and all I could find was legs up in the air – 10 of my cattle were dead,” an Irish farmer who lost several cattle in overnight told AgriLand.

Oliver Power, a beef farmer from Co. Kilkenny, Ireland told how on Tuesday morning (October 9), he was met with shocking scenes as he went to move the fence for his cattle.

Oliver explained: “There was not a bother on the cattle the night before (Monday, October 8) and then I went up the next morning and bang – 10 of them had died.”

The video below shows how frustrated Oliver felt when he arrived at the scene earlier this week – viewers beware that some strong language is used.

“I went home and called the vet, the department and the labs. By the time I got back up to the field to move them out, low and behold, another one of them had died.”

Oliver noted that the field the cattle were grazing was reseeded this year and that it was supposed to be cut for silage. But the crop never really took off, so the decision was taken to graze the field.

The stock were beef cattle from the dairy herd. Oliver believes the extreme weather this summer may have given rise to the situation.

The labs in Kilkenny returned the verdict that the cattle died from nitrate poisoning.

The Kilkenny beef farmer explained that as they were eating the grass, they were pulling the whole plant out of the ground and the lab results found gravel in the abomasum.

He added that the cattle may have met a pocket of the field with a high level of nitrates in it and “that may have been enough to do it”.

Oliver expressed his hope that other farmers might learn from this incident.

If I can help someone else, fair enough – because it was a bitter pill for me to swallow.

“My advice to farmers is if you’re in doubt of any particular paddocks, just test your grass,” he concluded.