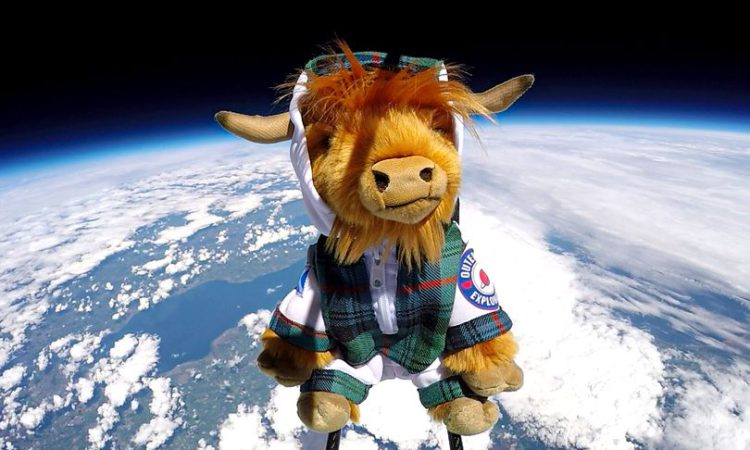 Forget flying pigs, a plucky little Highland Cow has just become the world’s first ‘coosmonaut’ after being launched into space to celebrate 50 years since the Apollo 11 moon landing.

VisitScotland decided to boldly go where no Scotch cow has been before in a bid to highlight the nation’s links to space exploration and the first Moonwalk.

The ‘Scotland is Out of this World’ trail is part of a new campaign of the same name which saw BuzzBò, the world’s first Highland Coosmonaut, soar 36,000m into near space clad in a custom-made Armstrong tartan spacesuit.

BuzzBò lifted off by weather balloon from Gilnockie Tower, the ancestral home of Clan Armstrong and landed safely near Cranshaws in the Scottish Borders.

He was named by seven-year-old Peter Lunan with the name deriving from Buzz Aldrin, the second man to walk on the Moon, and the Gaelic word for cow, Bò. The ‘Highland Coosmonaut’ will be on display over the summer at our Edinburgh iCentre on the Royal Mile.

Ohio-born Neil Armstrong was said to be proud of his Scottish heritage. The ancestral home of Clan Armstrong is Langholm in Dumfries & Galloway and in 1972, he became the town’s first and only Freeman, declaring it at the ceremony his “hometown”.

VisitScotland chief executive Malcolm Roughead OBE said: “For 50 years VisitScotland has helped position Scotland as a must-visit destination to audiences across the world.

“It is therefore fitting that in our anniversary year we set our sights even further and travelled into space in what can only be described as a truly ‘out of this world’ campaign.

“Scotland is Out of this World offered the opportunity to delve into the past and celebrate the country’s contribution to space exploration and astronomy and its ancestral links to one of the greatest moments in history.” 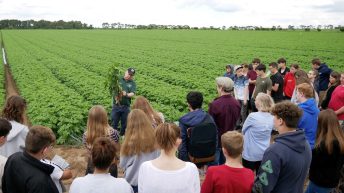 Inspirational farms in the running for top education awards