The withdrawal agreement struck between Prime Minister Theresa May and the EU has been rejected for a third time in the House of Commons.

The vote today (Friday, March 29) was carried out on the agreement itself, without the legally-binding element which had accompanied the motion on the previous two occasions, which had failed to pass through parliament.

In today's vote, the Brexit withdrawal agreement was defeated by 344 votes against to 286 votes for.

GOVERNMENT DEFEAT: The House of Commons has voted not to approve the Government's #WithdrawalAgreement with the EU.

344 MPs voted against the Government motion, with 286 in favour - a majority of 58. pic.twitter.com/jaeunVghPa 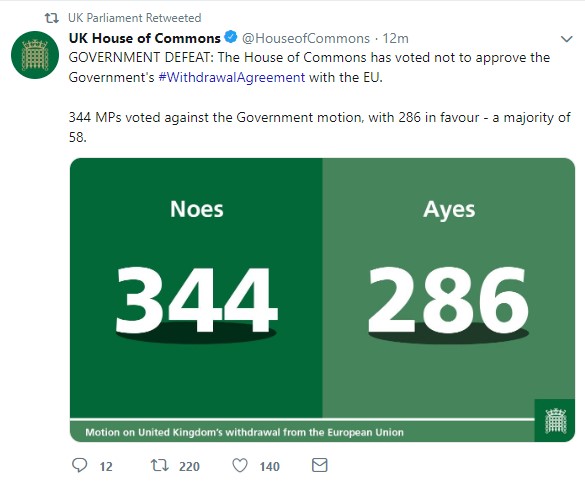 Once again, the DUP refused to back the motion, with the party's Brexit spokesman Sammy Wilson outlining that its stance "has not changed".

Attorney General Geoffrey Cox told the House of Commons that this is the "last opportunity to take advantage of our legal right" to delay Brexit to May 22.

Prime Minister May urged MPs before the vote to back the deal as the "last opportunity to guarantee Brexit".

On Wednesday, the prime minister said that she would resign if the agreement was passed, in a bid to win support for the deal among her more rebellious party members.

Following this defeat, it now appears that the UK is set on course for the earlier departure date of April 12. It is unclear as to what the prime minister's next move will be from here.

Responding to today's vote, the National Farmers' Union (NFU) said: "It is appalling that with just two weeks to go, there is currently no agreement or clear way ahead which will avoid a catastrophic, disorderly exit from the EU.

"British farmers, just like wider British businesses, have been placed in an awful position of uncertainty by our own Government and parliament," said NFU president Minette Batters.

Reiterating that point, NFU Cymru president John Davies said: "Brexit uncertainties continue to bear down on the sector, meaning that we have no idea of the trading conditions that we might be operating under in a matter of days."

Meanwhile, the Farmer's Union of Wales (FUW) is calling for the revocation of Article 50, saying it is the only way forward.

"With power over the Brexit process now resting firmly with parliament, MPs need to recognise that withdrawing Article 50 is the only way to secure sufficient time to allow a consensus to be reached," said FUW president Glyn Roberts.

MPs to vote on withdrawal agreement motion tomorrow...with a twist