Home » Machinery » Would this new front loader be a stretch at Agritechnica?

Would this new front loader be a stretch at Agritechnica? 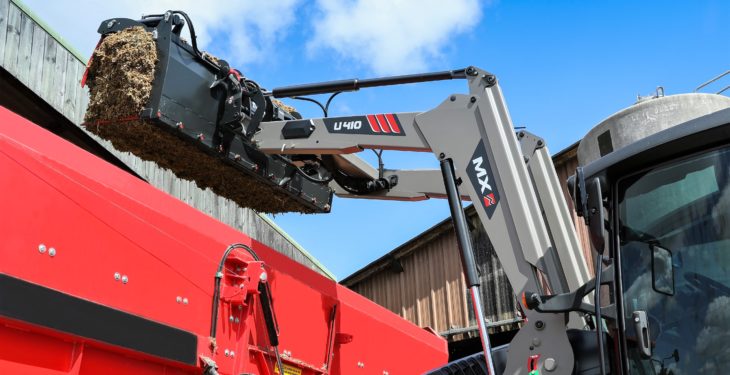 MX – the French tractor front-end loader and implement manufacturer – will show an expanded range of tractor loaders at Agritechnica.

Tractor brackets, along with accessories, are compatible with the more costly U and T Series loaders.

With a range of 14 models, the new U400 Series includes ‘plus‘ variants with greater lift capacity – for tractors up to 220hp. Lift capacities go up to 2,100kgs; maximum lift heights stretch to 4.25m.

At the top end, MX has added four ‘plus’ models to the T400 Series – again with added lift capacity.

A “unique” option on the T400 range is the e-Pilot control system (pictured below). It is designed to combine up to three movements simultaneously. This apparently makes it possible, for example, to lift, dump and operate a third function – all at the same time, with no loss of speed.

A Direct Control Joystick is fitted into the top of the main joystick; it provides two control axes – allowing a movement of the thumb to progressively activate both the third and fourth functions.

A waterproof, shock-resistant and electro-magnetically shielded module – fitted into the tractor’s dashboard – enables communication between the joystick handle and the MX’s hydraulic control valve. A BUSCAN cable linkage enables installation in the tractor cab.

‘Auto-Unload System’ allows a load to be emptied by opening the grab and tipping the bucket at the same time. ‘Auto-Level System’ then automatically returns the bucket to the horizontal position.

A single, long press on the ‘Continuous Third Function’ button allows a hydraulic motor to be powered up – without having to hold the button down – for example a feed bucket auger.

MX, which was established over 60 years ago and is headquartered near Rennes in the north-west of France, is represented here in Ireland by Farmec Ireland.