Farm trials to investigate how seaweed could lower livestock emissions 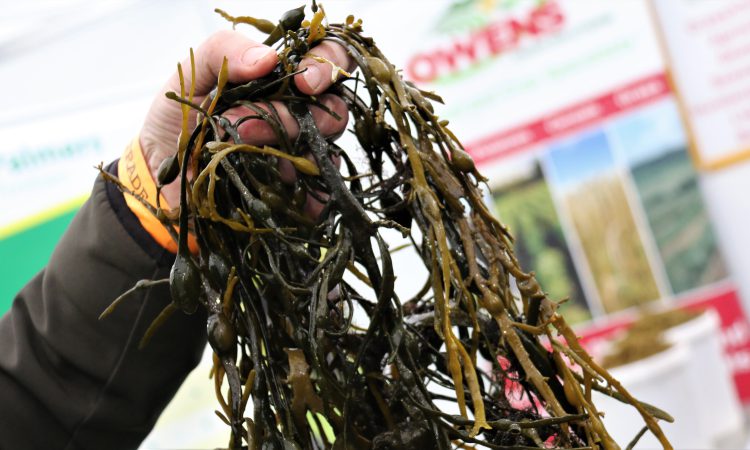 Northern Ireland’s first farm trials into the potential of seaweed to reduce emissions in dairy herds are set to begin in October, Agriland can reveal.

The study will examine the effect of seaweed on rumen fermentation and whether its inclusion can suppress methane emissions as a byproduct.

A project investigating the effects of feeding seaweed to sheep is also set to begin in the Republic next month.

It’s part of the €2 million Seasolution project led by Teagasc and carried out in collaboration with Queen’s University Belfast (QUB), the Agri-Food and Biosciences Institute (AFBI), the Institute of Technology Sligo, as well as institutions in Norway, Sweden, Germany and Canada.

Each of the institutions involved will run their own trials as part of the project, with the German and Swedish trials also set to start this year.

The Northern Ireland trials will be led by Queen’s University and take place at AFBI Hillsborough. The trials will focus on dairy cattle and will seek to establish the optimum volume of seaweed to include in a grass silage based ration, while also measuring seaweed’s effect on feed intake, milk production and composition, nutrient digestibility, and nitrogen utilisation efficiency.

In a separate project, Queen’s and AFBI will also take the project further into beef production.

The beef aspect of the study will likely start two years later and will also measure the effect on growth rates, as well as meat quality and composition.

It will also screen different seaweed species for their methane-reducing potential to establish if some native varieties have more potential than others.

It comes on the back of a lab-based study which finished last year at QUB, confirming that the inclusion of seaweed in livestock diets had the potential to suppress methane emissions from the rumen.

Sharon Huws, animal scientist and microbiologist at Queen’s University Belfast, who is overseeing the Northern Ireland aspect alongside AFBI researcher Tianhai Yan, said: “This is a very exciting space and could revolutionise the future of agriculture.

“It could be the silver bullet we have been trying to find in the move towards carbon-neutrality.”

Meanwhile, south of the border, a project led by Teagasc investigating the effect on sheep, particularly lamb production, will begin in May at Teagasc’s research farm in Athenry, Co. Galway.

Dr. Maria Hayes, senior scientific research officer at Teagasc Food Research Centre, explained seaweeds contain bromoform, which has been linked to some negative effects such as damage to the ozone layer.

However, red seaweed (Asparagopsis) contains much more than others. Researchers hope that locally-grown varieties containing less bromoform may have fewer unintended effects.

Dr. Hayes said: “We have been working on identifying the ‘best’ seaweeds and seaweed extracts to bring forward to animal trials in sheep, cattle and dairy cows.

“To be considered for trial, the seaweeds and seaweed extracts must be available in Europe in quantities that will permit their use as animal feed or feed additives. They must be affordable and they must be able to reduce methane emissions without negative effects on health and nutrition in the animal or in humans.

“Our focus is on native, abundant seaweeds containing actives like tannins, carbohydrates, peptides – actives other than bromoform. We use seaweeds like Asparagopsis aramata and A. taxiformis as positive controls only.

“The methane mitigation effect of Asparagopsis sp. is well documented by other research groups, but there are concerns about the availability of these seaweeds, the effects of high levels of bromoform (which is the active in Asparagopsis sp. that causes methane reduction) on the ozone layer, and potential negative health effects.

“The project has partners from Ireland and Northern Ireland, Germany, Sweden, Norway and Canada and will generate concrete data on the benefits of seaweed use as an animal feed or feed additive to reduce methane. Initial animal trials in sheep will begin in May 2021.”

Methane emissions are a major challenge for the industry locally, particularly as government focus moves towards net-zero emission goals.

In recent years there has been a particular focus on the agricultural sector.

Methane accounts for 23% of Northern Ireland greenhouse gas (GHG) emissions, with 80% of that originating from agriculture.

Most of that comes in the form of cow burps. According to the Department of Agriculture, Environment and Rural Affairs (DAERA) Greenhouse Gas Inventory, enteric fermentation (digestion in the rumen) remains NI agriculture’s largest source of GHG emissions, accounting for more CO2 equivalent gases than fertiliser use, manure management and agri-combustion combined.

It’s a similar situation in the Republic of Ireland where methane accounts for almost a fifth of national emissions and 58% of Irish agricultural emissions.

There have been some big claims about the potential of seaweed in recent years as a potential solution. One 2016 Australian study claimed including seaweed at 0.2% of Dry Matter Intake (DMI) reduced methane emissions by up to 98% in Brahman-Angus cross steers.

A small-scale experiment carried out in Sligo by seaweed start-up firm Dúlabio last year also found significant potential for red seaweed as part of a grass-based diet for beef cattle. It claimed that including seaweed in the diet reduced the number of methane eruptions (or burps) by 79.5% but did not examine the effect on emission volume. The study has not been published in any journals.

However, a trial carried out by Teagasc last year, on pasture-grazing cows, found including seaweed in their ration had no effect in reducing emissions. It did, however, find that including phytochemicals, the active ingredient from seaweeds, caused a slight increase in milk solids but did not reduce methane emissions per kilogram of solids.

Speaking at a webinar on Friday (April 16), Teagasc researcher Dr. Ben Lahart explained the disparity in results may partly come down to the type of seaweed used.

“It could be due to a number of reasons,” he said. “The indoor experiments are using predominately red sea, within our study we used a very small proportion of that within the supplement.

“The majority of the seaweeds were just green and brown seaweeds, which have been previously shown to be not as effective in mitigating methane. Research also shows the effect of red seaweed diminishes the longer it’s been in storage. Our supplement would have been waiting a number of months before it was fed out to the cows, so it could have lost its efficacy in that storage period.

“Then you have to add into the effect that it was grazing while the others have been indoors, and in that indoor study they were continuously offered the supplement throughout the day, whereas we were offering it twice daily so there are a number of different factors.”

Researchers are hoping to find a locally-grown variety of seaweed that could be effective in reducing emissions. If the crop’s freshness is central to its efficacy, importing seaweed could be ineffective.

There have also been suggestions that a synthetic additive could be derived from the most-suited seaweeds.

However, it’s much more challenging for synthetic compounds to gain Food and Drug Administration (FDA) approval as feed additives, with approval in some cases taking several years to obtain.