Two stolen tractors worth more than £200,000 have been found with false number plates 26 miles away from the Chorley farm they were taken from.

Both were recovered at around midday on Wednesday in separate locations.

The machinery’s owner, Kevin Ormisher told the Lanchasire Post he suspects the theft was carried out by organised criminals.

“There’s some damage to the tractors but we’re going to try and get them to our yard as soon as possible.

A silver 3,500gal Major tandem-axle slurry tanker and a green hook-loader trailer also stolen in the same incident have not yet been found.

“They might have been abandoned somewhere but if someone sees them please get in touch,” Ormisher added.

Anyone with information should contact Lancashire Police on the non-emergency number ‘101’.

Police in Cumbria are also appealing for witnesses after “high-value farm equipment and machinery” was stolen from a farm in Crosthwaite over the Bank Holiday weekend. 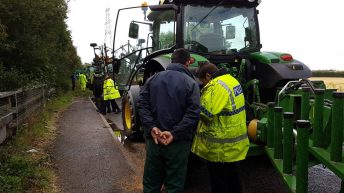