Aurivo has decided to increase its milk price by 1c/L for January supplies, the seventh price increase in a row.

The milk price was set today by the board of Aurivo, with the 1c/L increase bringing the base price to 31c/L including VAT for January milk.

Aurivo is the latest in a growing number of co-ops to announce milk price increases for January supplies.

The Dairygold Board today, February 17, increased the price for milk supplied to the Society in January 2017 by 1c/L.

This brings the Dairygold milk price for January to 31.5c/L, including VAT, and the 0.5c/L quality bonus.

Yesterday, Arrabawn Co-op announced a milk price increase of 1c/L, bringing its base price to 31.74c/L.

Arrabawn Co-op became the fourth co-op to confirm a price increase for January milk, following on from Glanbia, Lakeland Dairies and Kerry.

Glanbia has confirmed that it will pay its milk suppliers 31c/L, including VAT, for January manufacturing milk supplies.

Glanbia Ingredients Ireland (GII) has increased its base price for January by 1c/L to 31c/L including VAT for manufacturing milk at 3.6% fat and 3.3% protein.

Lakelands suppliers will receive a base price of 31.28c/L, including VAT, for January milk.

Aurivo has recently put plans in motion to carry out a €5m investment in its facilities in Co. Roscommon.

The company, headquartered in the north-west of Ireland, recently announced an extensive four-year development plan for its dairy ingredients facility in Ballaghaderreen.

The development, which is an upgrade programme of four phases up to 2020, will see the creation of a modern, state-of-the art production facility.

The construction of new access corridors into the processing plants and finished product laboratories as well, as new visitor facilities, will also be included in the first phase. 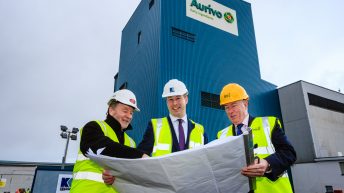 €5m investment in Aurivo facilities underway in the west