There is a worrying level of beef being imported from Botswana in Africa, which is unlikely to meet Northern Irish farm standards, according to Ulster Farmers’ Union Beef and Lamb Chairman, Crosby Cleland.

The level of Botswana beef imports coming through Belfast port has already reached 333t this year, he said.

“Since this trade was first highlighted last year it has continued to grow, while domestic producers remain under pressure.

For beef producers hit by poor market prices for much of this year, this is a worrying level of beef coming from a source unlikely to have farm standards equivalent to those in Northern Ireland.

“Since food labelling and quality assurance have become big issues for consumers it is surprising so little is known about where this imported meat is sold.”

Furthermore, the UFU Beef and Lamb Chairman added that those selling this imported meat were certainly not highlighting its origin.

“This makes it all the more important that environmental health officers and the Food Standards Agency keep a close eye on food businesses to make sure all controls are being met.”

In the context of Brexit, Cleland said trade agreements will be a major area of debate. He said farmers needed to be assured by political parties that agricultural interests will be fully represented at the negotiating table.

There are concerns that the UK government may do deals to import food from countries that do not meet farm standards in place in the UK. This is the concept of equivalency.

“Not making this a condition of trade would be a disservice to consumers and the agri-food industry, which is a key part of the Northern Ireland economy.” 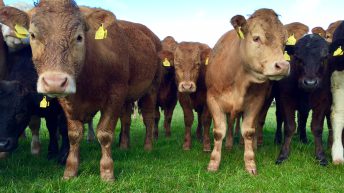 EU cattle herd increases for the fourth year in a row