A Ceredigion farmer’s involvement in a major grassland research project has led to major improvements in the performance of her sheep business, with measurable success in terms of pasture utilisation and lamb growth, and is now looking to take part in another trial to help move the industry to the next level.

Anwen Hughes of Bryngido farm, near New Quay in Ceredigion, has been part of GrassCheckGB, a research project run by Hybu Cig Cymru – Meat Promotion Wales (HCC) and several other industry partners since the beginning of the project in 2018.

GrassCheckGB aims to improve grassland productivity and pasture utilisation, with 50 livestock farms across Britain including nine beef and sheep farms in Wales, closely measuring their grass yield and quality along with soil moisture, temperature and weather readings.

Anwen runs a flock of 200 Lleyn-cross commercial ewes in partnership with her husband Rhodri and son Glyn on 35ha.

Since joining GrassCheckGB, Bryngido has moved to a rotational grazing system.

“GrassCheckGB taught us to utilise the grass in a more efficient way, and has enabled us to finish around 300 lambs on grass alone without the need for concentrates.

Moving to a rotational grazing system has also meant that we have seen an increase in lamb deadweight. This year we are seeing an average weight of between 18.5kg-19.0kg and we strongly believe that this increase in lamb growth is a direct result of better grass utilisation and management.

This year, the project will specifically be investigating lamb finishing diets and their possible influence on the taste of Welsh lamb. Bryngido supplied grass-fed lambs to the project.

The work was financed from the £3.5 million fund of the Agriculture and Horticulture Development Board (AHDB) red meat levies ring-fenced for collaborative projects which is managed by Britain’s three meat levy bodies – AHDB, HCC and QMS.

The fund is an interim arrangement while a long-term solution is sought on the issue of levies being collected at point of slaughter in England for animals, which have been reared in Scotland or Wales. 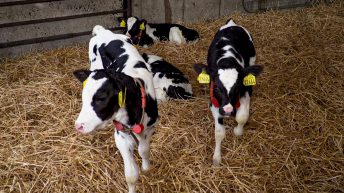