Poor animal health will wreck all the planning which has gone before it, Co. Meath-based veterinary surgeon Frank O’Sullivan told the Structures for Dairy Expansion Event hosted recently by Teagasc and Lakeland Dairies.

According to O’Sullivan, dairy expansion from within in a dairy herd is much safer than going to the market, but some new entrants will have to go to the market.

“Those who expand from within introduce no new diseases. So really what is happening on the farm is all they have to deal with,” he said.

He added that in some cases it will be necessary for a farmer to go to the market place to purchase animals for dairy expansion but he advised farmers to buy these animals from herds with known disease status.

According to O’Sullivan, the best animals to purchase are heifers which are not pregnant from herds with known disease history.

“The worst thing a farmer could possibly do is go to the mart and bring them in in drips and drabs, everything could go fine until the last lot of animals which could have the potential to wreck the place,” he said.

The Co. Meath-based vet added that introducing new animals to any herd has the possibility to put the balance of the herd out of line.

He also added that farmers thinking of expanding should have a herd health plan in place.

This plan should focus on parasites, calf disease, nutrition, somatic cell count and infectious diseases. If these are ignored before expansion the problem will only get worse with increased cow numbers.

“Even for a herd that is not expanding, there must be programs to keep health in check. If farmers are expanding without a proper health plan things will only get worse as numbers increase.

“Expanding for expansion’s sake – without getting these things in control – will only cause problems,” he said. 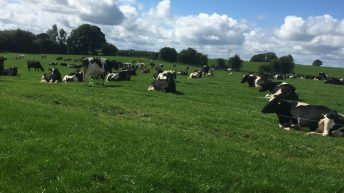