DUP to withdraw from north-south arrangements 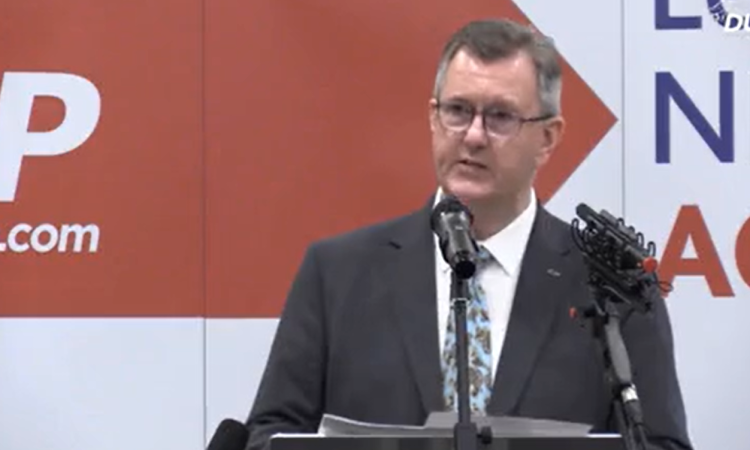 The leader of the Democratic Unionist Party (DUP) has said the party will withdraw from north-south arrangements with immediate effect.

Speaking at the La Mon Hotel in Co. Down today (Thursday, September 9), Sir Jeffrey Donaldson said it was “intolerable and unsustainable” that some strands of the agreement had been upheld while others had not.

As a result, he said members of his party would withdraw from Strand II, which makes provisions for North-South cooperation.

Setting out what he described as the party’s “strategic blueprint” to deal with problems resulting from the Northern Ireland Protocol, Donaldson also threatened to withdraw DUP ministers from Northern Ireland’s power-sharing government, should there be no legal basis to prevent further customs checks within the region.

‘A threat to NI’s political instituions’

“We attended the North-South Ministerial Council plenary meeting in July as an act of good faith and to give some space for issues to be resolved. That has not happened. I believe now is the time to act,” Donaldson said.

Therefore, as the protocol issues remain unresolved, the DUP will immediately withdraw from the structures of Strand Two of the Belfast Agreement relating to north-south arrangements, while we will ensure important health-related matters continue to be addressed on a cooperative basis.”

Donaldson said he made the decision “in full knowledge of the knock-on effects that such a move may have and the instability that may result”.

“We simply cannot go on like this,” he said. “The threat to the political institutions is not from our withdrawal from Strand Two, but from the protocol itself.”

Donaldson said the next few months would determine the future direction of Northern Ireland for decades to come.

…As leader of the DUP, I am not prepared to lend my hand to a protocol which so fundamentally undermines the Union and the economic integrity of the United Kingdom and Northern Ireland’s position in it.

“…Even those who negotiated the protocol on behalf of the U.K. in 2019, accept that it did not find the right balance and that a new balance must be found.”

Donaldson said he welcomed the announcement of further extensions to the grace periods saying they had meant the region had so far only experienced “protocol light”. However, he added that long-term solutions were required to secure political stability.

“No one can be in any doubt that the ending of the grace periods would have a devastating impact on Northern Ireland,” he said.

“Therefore, regardless of what the position of the UK Government or of the EU, in the future, DUP ministers would seek to block additional checks at the ports.

“In such circumstances, neither the Agriculture, Environment and Rural Affairs Minister nor his officials have any power to intensify checks, in the absence of Executive agreement.”

The DUP leader said he welcomed “creative solutions, which respect not just our demands but the concerns of others as well”.

We recognise the importance of the Single Market to the EU, and because of this, we are prepared to allow our facilities to be used to check goods that are going on into the EU.

“But we are not prepared to accept new checks on goods that are travelling within our own country.”

Threat to withdraw from the Executive

Donaldson said the party was also “examining the legality” of customs checks and whether they should have required Executive approval.

He said it would be “clear within weeks” whether an early election would need to take place, as he threatened to withdraw his ministers from the Northern Ireland Executive, Northern Ireland’s power-sharing government.

“Legal advice has offered ministers very little room for manoeuvre in this regard and flexibilities have been exploited to the maximum,” he said.

Let me be clear: If the choice is ultimately between remaining in office or implementing the protocol in its present form, then the only option for any unionist minister would be to cease to hold such office.”

Donaldson explained the final step was that his ministers would refuse to incorporate new EU rules into Northern Ireland legislation, in a bid to undermine the EU Single Market.

“We cannot and will not accept a situation where we are required to endorse and implement EU laws, whilst having no say in how those laws are formulated,” he said.

“Over time a failure to incorporate such law will mean that Northern Ireland will increasingly diverge from EU law and would ultimately undermine the operation of the EU Single Market.”