Home » N.Ireland » Eustice confirms the importance of farming and food in Northern Ireland

Eustice confirms the importance of farming and food in Northern Ireland 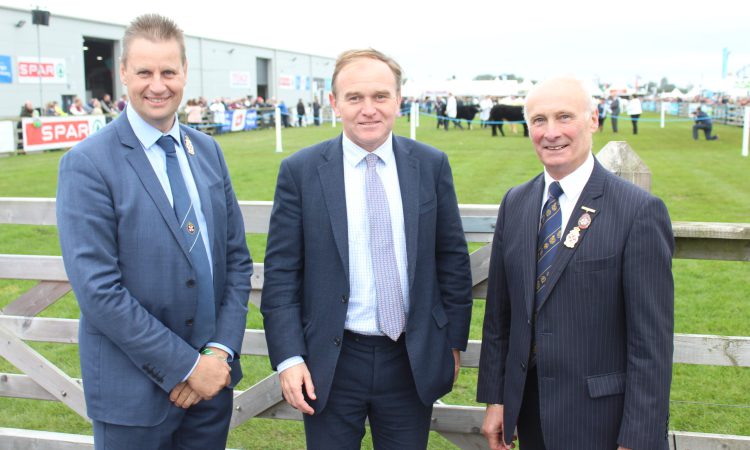 Day two of Balmoral Show was marked by Department of Environment, Food and Rural Affairs (DEFRA) Secretary of State George Eustice MP, confirming the importance of Northern Ireland’s farming sectors to the UK food industry as a whole.

He also made it clear that – in his opinion – beef and lamb are integral components of a healthy diet.

“The annual farming budget will remain as is until the end of the current parliamentary term at Westminster, which could take us up to 2024,” he said.

Eustice also indicated that Stormont would have a fair degree of autonomy when it comes to deciding on the specific farm policy put in place for Northern Ireland.

“On future funding, we have a manifesto commitment in place, which we will keep. Support levels will be maintained at current levels in cash terms for each and every year of this parliament,” he continued.

We stand by that. This means that Northern Ireland will continue to get from the UK government the envelope of cash that it would have received in the final year of being in the European Union, set at those 2019 exchange rates.

“Obviously, the exchange rate went down between 2016 and 2019 so, overall, farmers right across the UK have an envelope of cash that is higher than it would be relative to a historical average.

But it will be fixed at that level for the duration of that parliament.”

According to Eustice, Northern Ireland’s politicians will have pretty wide freedoms when it comes to spending this money.

“Agriculture is a devolved matter. We are not in the business of being like the EU of handing down rules and then having auditors picking holes in what individual parts of the UK do,” he said.

“However, we will have a state aid regime that has some over arching functions in order to make sure that there aren’t major distortions within the internal UK market.

But outside of that, there will be very wide freedoms for the different parts of the UK to pursue policies that are right for them.”

Looking further ahead, Eustice confirmed that all the political parties at Westminster recognise that agriculture must deliver for the environment and the agricultural landscape.

The DEFRA minister also indicated that agreement was close at hand between the UK and European authorities, one which would allow pedigree livestock – cattle and sheep -to travel to Great Britain for sales and to be returned home immediately, if not sold.

Currently, stock leaving Northern Ireland for Great Britain can only be returned home after a six-month isolation period across the water.

The envisaged agreement will take the form of a bespoke veterinary accord. This will include specific measures for Scrapie, where sheep are concerned.